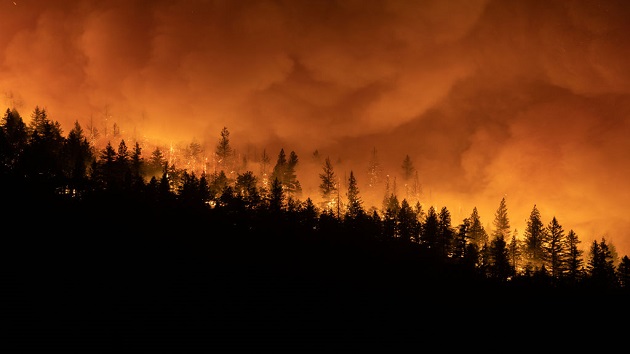 (PLUMAS COUNTY, Calif.) — Four people are missing as the Dixie Fire rages on in California, the Plumas County Sheriff’s Office said in a statement Saturday.

“We are seeking the public and the media’s assistance is helping us locate the individuals so we can report back to their loved ones,” they said, adding that their investigation unit has already located 21 other individuals who were previously unaccounted for.

The sheriff’s office had said earlier that eight people remained unaccounted for, but some have since been found.

“We request if you know where any of these people are to contact them and have them call the Sheriff’s Office at 530-283-6300 to let us know they are safe, so we can report back to the person(s) looking for them,” the police said.

The names of the five unaccounted for individuals are: Robert Nelson of Chester, Donna Shelton of Greenville, Dianne Doppert of Greenville and Shenandoah Lisenbee of Greenville, according to the statement. Authorities said Shelton was reported safe, but they have not made contact with her.

Cal Fire public information officer Rick Carhart said Saturday afternoon that four firefighters were injured in the west zone during the morning. They were taken to area hospitals. Three have been released, while one remains in the hospital in stable condition.

The Dixie Fire has been burning near Feather River Canyon for weeks and has now scorched through more than 446,723 acres since it sparked on July 13.

It is 21% contained and is now considered the third-largest fire in California history. More than 5,100 fire personnel are currently working on containing and putting it out, according to Cal Fire.

The downtown neighborhood of Greenville, about 150 miles northeast of Sacramento, has been hit the hardest by the out-of-control fire, with Plumas County Sheriff Todd Johns saying Thursday that “well over 100 homes” and many businesses and historic building have been destroyed by the flames.

It is one of 90 large wildfires, many of them uncontained, that are currently burning in the West.