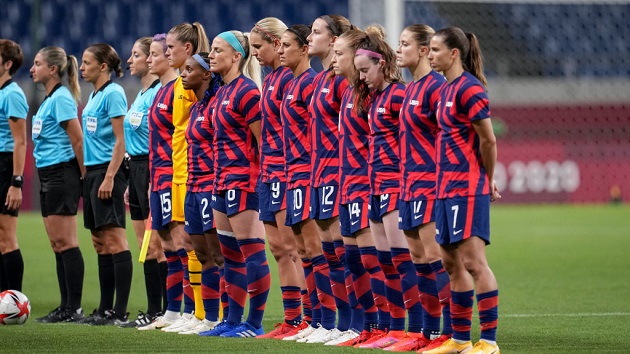 This week, Park announced that the women’s adventure and outdoor apparel retailer will contribute $1 million to USWNT players to support their fight for equal pay. In addition, Title Nine established the “Kick In For Equal Pay” initiative, where the company will match any donations up to $250,000.

“My hope with this contribution is that we all are conscious of the small and large things that we can do,” Park told “Good Morning America.”

Park, a former athlete at Yale University and an beneficiary of Title IX, a federal civil rights law that was passed to prohibit sex-based discrimination in schools or education programs that receives federal money, said she was compelled to support USWNT players after watching the HBO Max documentary “LFG,” which chronicles their ongoing fight for equal pay.

In March 2019, the players sued the U.S. Soccer Federation for gender discrimination, despite the courts having dismissed their equal pay claims last year. While competing at the Olympics, the team filed an appeal stating the ruling “penalized the USWNT players for their success.”

“These women, they play more games, they win more games, and yet they are paid less, so I was really mad about that,” Park said. “But then I also realized I’m kind of mad at myself. Like, it’s not just up to U.S. Soccer to fix this — it’s up to all of us.”

In a statement to ABC News, the U.S. Soccer Federation said it is “committed to fair and equal pay for our Women’s National Team players – and for all women.”

Park’s decision to contribute to the USWNT’s fight for equal pay is also a personal one. As a mother of two kids who both have big athletic dreams, Park wants to make sure they’re both able to pursue them in a way that’s equal.

“I have a son, Leo. And he’s a basketball player. And I have a daughter, she’s a soccer player, amongst other things,” she said. “I think about Leo when he was young — he dreamed of being in the NBA. You know he could dream of making a living doing that … My daughter is a soccer player — shouldn’t she have that dream, too? Don’t we want all our sons and daughters to have the same dreams?”