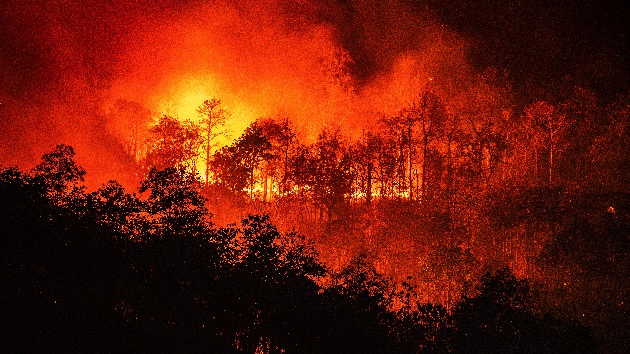 (NEW YORK) — The Pacific Northwest is bracing for another heat wave as large wildfires continue to burn through the region.

While the spread of wildfires has slowed in recent days, that could soon change. Temperatures near Portland, Oregon, and Spokane, Washington, are expected to approach 100 degrees by Friday and dry lightning originating from the deadly monsoons in the Southwest could spark more fires.

Currently, dozens of uncontained wildfires are burning in the U.S., with the majority of them located in the West — a region experiencing tinderbox conditions as a result of megadrought and climate change.

The Dixie Fire near the Feather River Canyon in Northern California has grown to nearly 218,000 acres, destroying more than a dozen structures, and was 23% contained. Crews are prepping for structure protection in Taylorsville, California. The fire is now the largest burning in the state and more than 8,000 people are under evacuation orders, according to the California Governor’s Office of Emergency Services.

The Bootleg Fire in southern Oregon, currently the largest in the country and the third-largest in state history, has burned through more than 413,000 acres and was 53% contained by Tuesday.

The Tamarack Fire near Gardnerville, Nevada, has scorched more than 68,000 acres by Monday and was 59% contained.

A heat wave is blanketing much of the country outside the West as well.

The heat dome is continuing to build from the north and central Plains to New Orleans. Fifteen states are currently under heat warnings and advisories.

The humidity and high temps will make it feel more like 110 degrees for some areas. Some cities in the upper Midwest, such as Sioux Falls, South Dakota, and Minneapolis, could break records as temperatures climb toward 100 degrees.

The push for electric vehicles may be killing sedans for good: Experts
Iowa Republican Sen. Chuck Grassley, 88, running for reelection
GOP-led review of Arizona ballots reaffirms Biden’s win
Harris interview with ‘The View’ delayed after co-hosts test positive for COVID-19
Generational wealth implications: Black and Latino-owned homes are more likely to be undervalued
Nick Cannon teases possibility of having more children: “My therapist says I should be celibate”