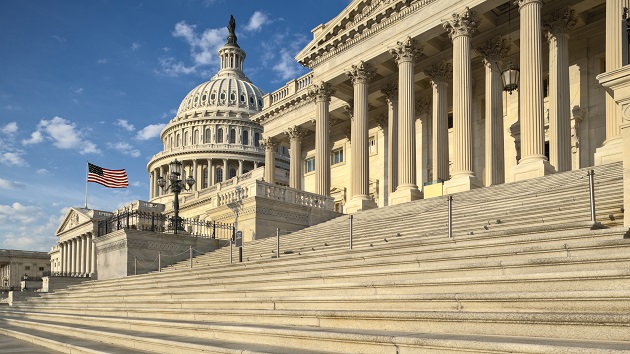 (WASHINGTON) — If House Speaker Nancy Pelosi holds off voting on the bipartisan infrastructure bill until a larger bill is passed through reconciliation by the Senate, the Democrats could end up with nothing, Sen. Rob Portman, R-Ohio, said Sunday.

Pelosi, in a separate interview earlier on ABC’s “This Week,” said that she plans to stick with her decision to hold any vote on the bipartisan deal until after the Senate passes a larger infrastructure package through reconciliation.

“I won’t put it on the floor until we have the rest of the initiative,” Pelosi said.

“I’m not happy with what she said,” Portman told “This Week” anchor George Stephanopoulos. “It’s inconsistent with the agreement that we have on a bipartisan basis.”

Portman’s optimism on Sunday indicated that negotiations have improved since late last week.

Democrats were making a behind-the-scenes push to move some funding away from highways to increase federal funding for transit. The senator was so frustrated with the state of negotiations on Thursday that he told reporters they might just drop highway funding from the bill entirely.

“We have one issue outstanding and we’re not getting much response from the Democrats on it — it’s about mass transit,” Portman said Sunday.

Negotiators told ABC News the bipartisan infrastructure package could be ready to vote on again as early as Monday. Portman emphasized the popularity of the bill.

“Eighty-seven percent of the American people think we should do a bipartisan infrastructure package. It’s the right thing to do. Every president in modern times has talked about it,” Portman said.

Portman also rejected criticism that the negotiations on the bill are not truly bipartisan.

“The Wall Street Journal weighed in against the deal yesterday on their editorial page — It says, taking the “bi” out of bipartisan. And they write: What’s striking about the deal so far, however, is that by all appearances, this will be the most one-sided bipartisan deal in decades,” Stephanopoulos said.

“Every single one of the issues has been bipartisan in the sense there have been Republican views and Democrat views and we found a way to find common ground, which is exactly what ought to happen,” Portman responded.

Stephanopoulos also pressed Portman on why the Republicans have yet to vote on raising the debt ceiling when they did so three times under former President Donald Trump.

“Under every president there is a discussion of how you actually — if you’re going to raise the debt ceiling, how — how to use something to affect the debt, particularly the long-term debt of this country,” Portman responded. “And I think we ought to have that discussion.”