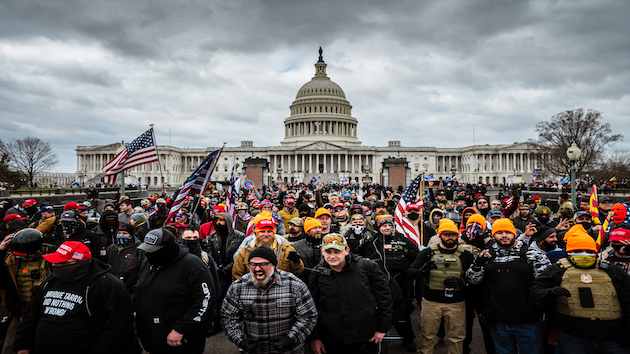 (WASHINGTON) — On the day before a House committee was set to open its investigation of the Jan. 6 Capitol assault, House GOP Leader Kevin McCarthy kept up his effort to dismiss the probe and attack the Republicans who’ve agreed to serve with Democrats.

When asked on Monday if he’ll punish the two Republican members — Reps. Liz Cheney of Wyoming and Adam Kinzinger of Illinois — McCarthy said “we’ll see,” amid speculation their fellow Republicans might try to remove them from House committee assignments for accepting House Speaker Nancy Pelosi’s invitation.

Speaking with reporters after a bipartisan White House even celebrating the Americans with Disabilities Act, McCarthy called them “Pelosi Republicans.”

“Couldn’t tell you,” he said, when asked the last time he spoke to Cheney and Kinzinger.

When asked for his take on the first witnesses — law enforcement officers who defended the Capitol against the pro-Trump mob — McCarthy replied, “I don’t know.”

Back on Capitol Hill, Cheney shot back at McCarthy.

“We’ve got very serious business here. We have important work to do. And I think that’s pretty childish,” she told reporters.

Kinzinger on Monday slammed other Republicans in response to McCarthy’s dig.

“If the conference decides, or if Kevin decides they want to punish Liz Cheney and I for getting into the bottom and telling the truth, I think that probably says more about them than it does for us,” he said.

Kinzinger added his preference was the independent commission negotiated and then blocked by GOP leaders.

“It’s become obvious that there are some that just simply don’t want answers, and that to me is unacceptable,” he told reporters.

Chairman Bennie Thompson, D-Miss., and Cheney will each deliver opening statements in Tuesday’s hearing before the police officers testify, according to a congressional aide. The committee will hear from Capitol Police Officers Harry Dunn and Aquilino Gonell and Michael Fanone and Daniel Hodges of the Metropolitan Police Department.

Normally, the ranking member — or top Republican — would be given an opportunity to make opening remarks after the committee chair speaks. But Republican leaders have pulled their members from the panel, leaving only Cheney and Kinzinger as the only GOP members.

Cheney and Kinzinger are the only two House Republicans who voted to form a select committee after Senate Republicans killed a proposal for a bipartisan, independent commission. Like Cheney, Kinzinger is among the 10 Republicans to vote to impeach Trump for “incitement of insurrection.”

Tuesday’s hearing is expected to go two to three hours and will feature video elements, according to an aide.

McCarthy has vowed that his GOP appointments won’t participate after Pelosi rejected two of them — Republican Reps. Jim Banks of Indiana and Jim Jordan of Ohio — citing statements made and actions taken, she said, would threaten the credibility of the committee.

“In his view, in our view, tomorrow’s hearing will be an opportunity to hear firsthand from the men and women in the Capitol Police and the Metropolitan Police Department who bravely protected our Capitol on that day. His goal is the same goal that Speaker Pelosi has, which is to get to the bottom of what happened and prevent it from happening in the future, and he trusts her leadership to do exactly that,” she said.

Dunn, one of the police officers who is scheduled to testify Tuesday, tweeted out Monday asking for “good vibes.”

Fanone, an officer with the Metropolitan Police Department who was brutally attacked by rioters on Jan. 6, video shows, told ABC News Congressional Correspondent Rachel Scott that he plans to testify in uniform Tuesday and said he won’t let politics hinder his appearance.

“I don’t get care what the vehicle is — as long as the truth comes out,” he said, when asked about Republicans who are throwing cold water on the committee. Fanone was at the Capitol Monday to prepare for the hearing.

He added, he supports any investigation that is looking for a “factual account” of what happened that day.

Back in May, Fanone and Dunn escorted the family of fallen Capitol Police Officer Brian Sicknick door-to-door on Capitol Hill pleading with Republicans for an independent commission.