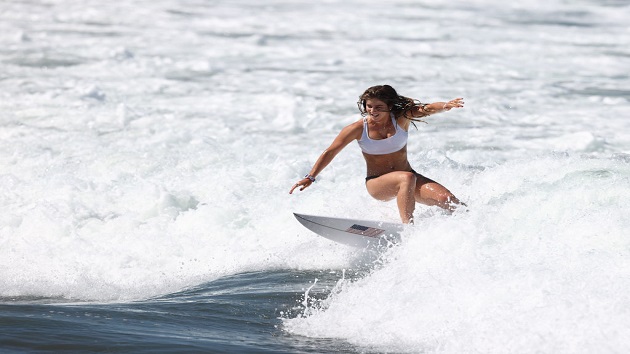 (TOKYO) — Unlike most sports at the Tokyo Olympics, the venue for surfing will be decided by when and where Team USA hopefuls such as Carissa Moore and Kolohe Andino paddle out off Japan’s Shidashita Beach.

Organizers of the first-time event have scheduled an eight-day waiting period — July 25 to Aug. 1 — to squeeze in up to four days of competition based on daily conditions — wave heights, direction, wind strength.

Kurt Korte, the international surf forecaster for the Olympic surfing event, told ABC News this week that conditions off the Pacific Coast of Japan are starting to look good with signs of a tropical cyclone forming well south of Shidashita Beach that could whip up the type of waves for great competition among the best surfers in the world.

“That storm as it moves past could set us up for some pretty good surf. So that’s kind of what we’re eying right now for the initial part of the contest,” said Korte, who lives in North Carolina and works for Surfline.com, a company that provides global wave and ocean forecast.

“It’s definitely within the realm where we could see overhead surf and good conditions as this thing moves past,” Korte said. “It’s really fortunate that this is what’s happening for the opening days.”

Korte said Surfline.com has worked with Olympic officials for the past six years to determine if surfing was even possible at the Tokyo Games. The company analyzed 35 years of weather and ocean data to suggest Shidahita as the best possible spot, and Korte left for Japan this week to study the ocean and make recommendations on which days the competition should unfold.

The inaugural event will feature 20 men and 20 women from 17 countries.

The four-member U.S. team, described as a “Dream Team” by USA Surfing, is a heavy favorite. The Americans are led by the 27-year-old Andino of San Clemente, California, who holds seven USA Surfing Champion titles, and Moore, 28, of Honolulu, the No. 1-ranked female surfer in the world who holds four World Surfing League titles.

The American team is expected to face stiff competition from Brazil, which boasts Gabriel Madina, the world’s No. 1-ranked men’s surfer, and Italo Ferreira, the No. 2-ranked surfer in the world. The Australian team, led by seven-time world champion Stephanie Gilmore, is also expected to compete for gold.

How the competition will work

The surfers qualified for the Olympics based primarily on how well they did at previous major competitions, including the 2019 World Surfing League Championship Tour, where Florence and Moore each came out on top.

The Olympic Games will be exclusively a shortboard affair, meaning surfboards are less than 7 feet long, with pointy noses and usually three small fins on the underside.

Once the water conditions are deemed fit, according to Olympic rules, athletes will take to the ocean four at a time and compete in heats, with the first round consisting of four heats.

A five-judge panel will base scores on a scale of 1 to 10 that can include decimal points. Competitors will be judged on speed, power, snap turns and how seamlessly they flow on a wave. Judges also look for difficulty, risk and innovation of maneuvers performed, such as a barrel, or riding through the tube a curling wave makes, and aerials in which surfers ride up the face a wave and catch air at the lip.

In April, Moore wowed spectators at the Rip Curl Newcastle Cup, the second leg of the World Surf League’s Championship Tour, by nailing an aerial where she landed a reverse on the face of a wave before spinning another 180 degrees forward. The judges gave her a near-perfect score of 9.9.

In each heat, surfers will be given a 30-minute window to catch as many waves as possible but must go one at a time, with the surfer closest to the peak of a wave given preference to catch it. Participants can be docked points for violating surfing etiquette by cutting in line.

The best two scores from each surfer will decide who moves on to the next round and, eventually, the medal round, where whoever is left will compete head-to-head.

“I’m stoked, super stoked,” Andino told People magazine before heading to Japan. “I think the waves on offer in Japan will be pretty fun. It’ll be a lot of aerial maneuvers, so it should be pretty exciting to watch.”

America Strong: Teachers across the country go above and beyond as in-person classes return
“Ugh! Don’t do that!” ‘Sopranos’ creator David Chase on how his crew hated series finale set to “Don’t Stop Believin'”
Could Jason Sudeikis return to ‘SNL’ as the first host of the new season?
500 US women athletes ask Supreme Court to uphold abortion rights
FBI swarms home belonging to family of Gabby Petito’s boyfriend: Live updates
Over 200 companies pledge net-zero emissions by 2040 as pressure on private sector mounts