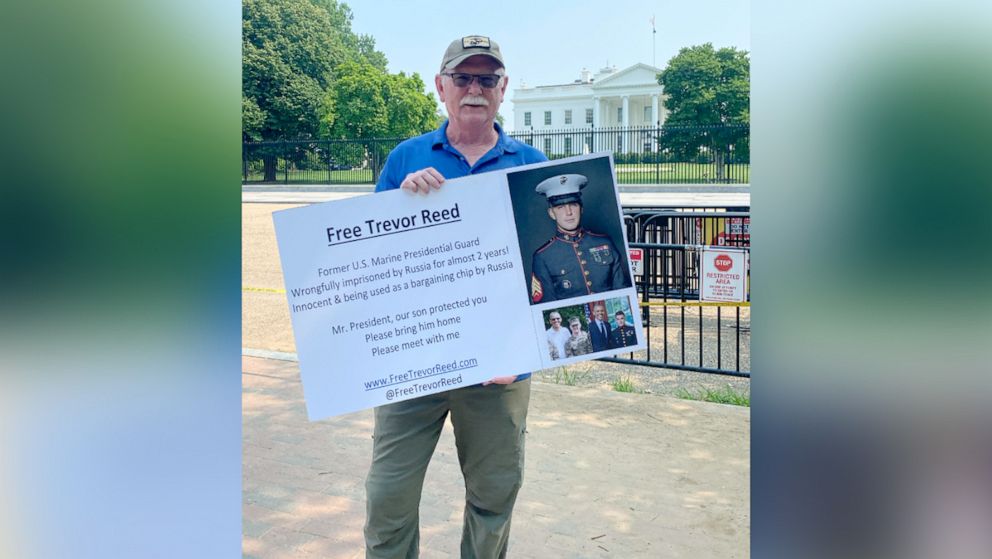 (WASHINGTON) — On one of the hottest days of the summer, Joey Reed stood alone outside of the White House, holding a sign with a picture of his son that said in bold type: “Free Trevor Reed.”

“Former U.S. Marine Presidential Guard wrongfully imprisoned by Russia for almost 2 years! Innocent & being used as a bargaining chip by Russia,” the message on the sign continued. “Mr. President, our son protected you. Please bring him home. Please meet with me.”

The plea was written next to images of his son in uniform, including two taken of him with former President Barack Obama.

U.S. officials said the Marine veteran, has been held for nearly two years in Russia on charges that U.S. officials said were fabricated in an effort to use him as bargaining chips in a potential prisoner swap between the two countries.

Joey Reed told ABC News on Tuesday that he hopes that more Americans learn that his son is one of two former U.S. Marines being held there.

The elder Reed, who has met with several White House officials, said that he hopes to meet with President Joe Biden but until then he plans on standing outside of 1600 Pennsylvania Avenue.

“We’re really surprised at how many Americans don’t know what’s happening with our son,” he said.

He added, that he “just wanted to be here and then also just raise attention with the president who’s already doing a great job for our son.”

Trevor’s saga started in Moscow in August 2019, the younger Reed, while visiting his girlfriend in the city, and studying Russian, was taken to a police station to sober up after a drunken party. He would later be questioned by agents from Russia’s FSB intelligence service, and suddenly charged with assaulting an officer according to his father.

During Biden’s June meeting with Russian President Vladimir Putin, the president spoke about Reed and another Marine veteran, Paul Whelan, who has also been held in Russia for two years. The Kremlin during the June meeting signaled it might be prepared to discuss a deal for their release.

In response to ABC News on Tuesday, a White House spokesperson said, “The president raised the case of Trevor Reed directly to President Putin in Geneva. He was very clear about the need to resolve his and other cases and see him freed.”

“The welfare and safety of U.S. citizens abroad is one of the highest priorities of the U.S government,” the statement continued. “We will continue to speak on his behalf until Russia does the right thing and returns him to his family in the United States. Trevor has been deprived of his freedom for far too long. We continue to engage with Russia on this case, as well as other U.S. citizens wrongfully imprisoned in Russia.”

Joey Reed, a Texas native told ABC News on Tuesday, that his life revolves around freeing his 30-year-old son, who followed in his father’s footsteps to become an elite Marine. He even uprooted his life to move to Russia for 14 months in an effort to free him.

He said after the meeting between Biden and Putin he was “hopeful,” but he wants other Americans to know that his son is “innocent and he didn’t do any of the things that they say he was doing.”

Trevor “received the longest sentence in modern Russian history for assaulting police officers when no one was hurt, and the only evidence that shows that he didn’t do anything,” he added.

He said he’s spoken to several Biden officials about his son, including Secretary of State Antony Blinken, earlier in the year for nearly two hours. Reed said he gets weekly updates from the State Department and that “they try and keep us informed and find out if there’s anything we need. And they tell us what they do.”

Reed said Russia is a beautiful country however, he’s warning other Americans thinking of traveling to Russia to think again.

“If we didn’t have this problem with their — with their government and or their law enforcement, you know I would — I would tell everyone to go there, but I recommend the opposite. No American should go there,” he said.

The past two years have been hard — he said his wife has crying spells and “sometimes I break down.”

“I see a movie or something related to what my son’s going through it hits home all of a sudden.”

However, he also said he takes each day at a time and is hopeful because he knows, “nothing’s gonna happen immediately, but you know there’s hope on the horizon with President Biden.”