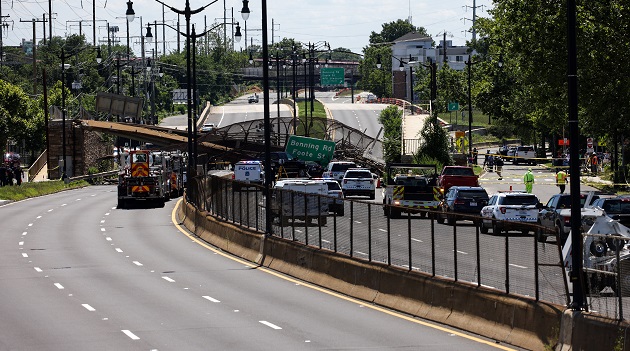 The incident occurred just before noon Wednesday on DC-295 near Polk Street. The collapse appears to have been caused by a collision, D.C. Deputy Mayor for Public Safety Chris Geldart said during a press briefing.

Based on the preliminary investigation, a truck carrying diesel fuel may have collided with the bridge, causing it to separate from its mooring, he said. Multiple cars were then involved in the crash, with five people in those cars transported to local hospitals, he said.

“Everything we see on the accident scene right now leads to this being a collision pulling the bridge off its mooring,” said Geldart, who noted they were “very lucky” there weren’t any serious injuries.

Images following the collapse showed a truck crushed under the bridge, which appeared to have completely detached from a staircase and platform at one end. Metal fencing and other debris covered DC-295, which is one of the main highways in the city.

The crash investigation and bridge removal could continue through Thursday, with traffic on the highway halted in both directions, Geldart said. Fire department responders were able to stop a diesel fuel leak.

There were no structural concerns with the bridge when it was last inspected in February, officials said.

Officials did not yet have an estimate on when the highway could reopen, or how long it would take to rebuild the bridge.

Clara McGregor shows off fresh face, a month after dog bit her
‘Modern Family”s Ariel Winter hopes for “freedom” for Britney, “consequences” for people “who have kept her away”
Chrissy Teigen thanks fans for sending the “most amazing” condolences after loss of baby Jack
CDC advisory committee voices support for immunocompromised people getting boosters
Some people making $100K or more say the benchmark for financial success has shifted
New York Jets assistant coach Greg Knapp dies after being struck by vehicle