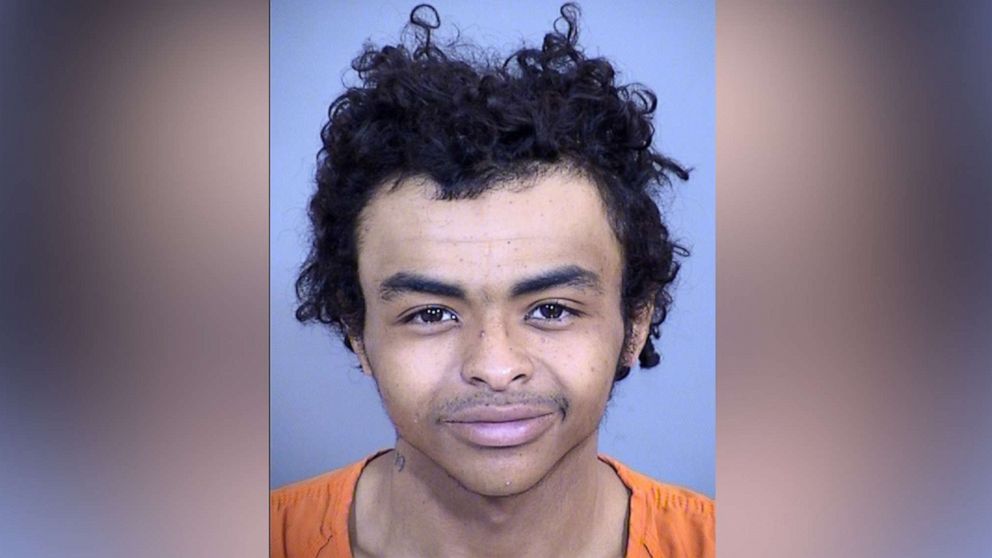 (PHOENIX) — The suspect in a shooting spree targeting pedestrians and vehicles throughout metropolitan Phoenix on Thursday is a teenage security guard who allegedly told police he believed people were after him in the wake of a separate shooting he was involved in while working at a restaurant last month, according to court documents.

Ashin Tricarico, 19, of Surprise, California, was charged Friday with first-degree murder, aggravated assault, drive-by shooting and endangerment in connection with the shootings, which left one person dead and a dozen others injured. There may be additional charges based on the investigation, police said.

He is being held on $1 million bond, according to jail records. Attorney information was not immediately available.

Police said Friday they have not yet identified a motive in the complex case, which involved at least eight different shooting incidents over the course of a 90-minute period Thursday morning throughout the West Valley, according to the Peoria Police Department, which is leading the investigation.

The victims ranged in age from 19 to 56, police said. A 56-year-old man was fatally shot, and three other victims suffered gunshot wounds. Others were injured by broken glass.

One victim said she heard three gunshots and immediately felt pain in her arm, stomach and head and realized she had been shot, according to court documents. It was later determined she was hit by a projectile fragment. She had a 3-year-old daughter in the back seat.

According to the probable cause document, during an interview with detectives, Tricarico indicated he believed people were following him around after being involved in a shooting in Phoenix about a month ago, according to the court documents.

“Ashin thinks every vehicle and person he drives past is pointing a gun at him,” the court documents stated.

The Phoenix Police Department confirmed to ABC News that Tricarico was involved in a shooting on May 5 at a restaurant where he was working as a licensed armed security guard.

In a statement, the department said Tricarico “was asked to deal with a male customer who was reportedly intoxicated and causing a disturbance.”

The customer allegedly charged Tricarico after he went outside to call 911. Tricarico then allegedly fired one shot at the man, striking him and causing a non-life-threatening injury, police said. The aggravated assault case is still under investigation, and Tricarico allegedly told police he shot in self-defense, the department said.

During the interview with detectives after his arrest, Tricarico allegedly admitted to committing some of Thursday’s shootings and claimed he was shot at or had a gun pointed at him during them.

Tricarico told police that an “unknown male” pointed a gun at the suspect at a car wash Thursday morning, after which Tricarico then allegedly bought ammunition for his AR-15-style rifle, according to the court documents.

To start the spree, the suspect allegedly stared down a person outside a Circle K convenience store and then exchanged words with him before following him in his car and shooting at the victim, according to the documents.

Tricarico requested an attorney “when told he had killed a man” and the interview ended, the court documents stated.

Police covered an AR-15 rifle and two magazines in his car, and multiple .223-caliber shell casings were found from the crime scenes, according to court documents.

Several witnesses positively identified Tricarico as the alleged shooter in their incidents, according to court documents.

Police do not believe there are any additional suspects in Thursday’s shootings.