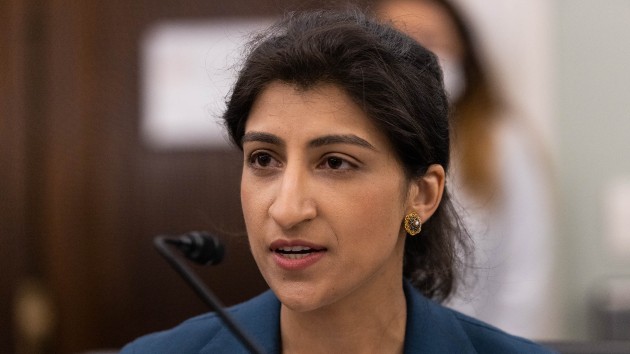 (WASHINGTON) — Lina Khan made history earlier this week when she was sworn in as chair of the Federal Trade Commission and became the youngest person ever to hold the top role at the agency tasked with enforcing antitrust laws and protecting consumers.

While the 32-year-old Columbia Law School professor may not be a household name, she has developed a reputation in her field as a fierce critic of Big Tech’s dominance. Now that she’s transitioning from blasting tech or e-commerce firms in op-eds and in academic papers to overseeing potential regulations on the sector, many are speculating what her new role could mean for an industry largely left undisturbed by legislators as its size and influence exploded.

Khan called it a “tremendous honor” to be selected to lead the FTC in a statement, saying she’s looking forward “to working with my colleagues to protect the public from corporate abuse.”

She was nominated by President Joe Biden in March and sworn in on Tuesday, just hours after a 69-28 Senate confirmation. Her term lasts until Sept. 25, 2024.

“For the last decade, I have focused on studying and investigating markets across our economy and examining the laws that enable honest and fair competition,” Khan said in prepared remarks for her nomination hearing before lawmakers last April.

She said she started her work as a journalist and policy analyst, documenting the state of competition across myriad industries and tasked with uncovering “abusive business practices that excessive market concentration can enable.”

“I spent years studying markets ranging from chicken farming and airlines to aluminum and book publishing, and learning from entrepreneurs and small businesses about the obstacles that they face,” Khan added. “This work taught me the importance of fair competition, and the critical role that the antitrust laws play in encouraging business dynamism and promoting widespread prosperity.”

As a legal scholar, she said her focus has been on the history of America’s antimonopoly laws. Her scholarship in this arena, such as her Yale Law Journal publication “Amazon’s Antitrust Paradox,” has been widely cited. Her work has also been published in the Harvard Law Review, Columbia Law Review and University of Chicago Law Review.

More recently, Khan worked in government by serving as counsel to the House Judiciary Committee’s Subcommittee on Antitrust, Commercial and Administrative Law. In this role she helped produce a scathing, 450-page report on the state of competition in the digital economy that was the result of a 16-month investigation by the subcommittee and included hearings with tech industry titans such as Amazon CEO Jeff Bezos, Apple CEO Tim Cook, Facebook CEO Mark Zuckerberg and Google CEO Sundar Pichai.

The report, which names Khan as a contributor, claimed that a handful of tech companies “that once were scrappy, underdog startups” have “become the kind of monopolies we last saw in the era of oil barons and railroad tycoons.”

In her nomination hearing, Khan said that pursuing this investigation “underscored the important work that enforcers and lawmakers must do to ensure that longstanding laws are keeping pace with new technologies and reflecting current business realities.”

Khan’s ascension to lead the FTC largely was met with silence from the private sector but lauded by lawmakers and advocates.

Sen. Elizabeth Warren, D-Mass., said in a statement earlier this week that Khan’s new position was “tremendous news” and an opportunity for change.

“Lina brings deep knowledge and expertise to this role and will be a fearless champion for consumers,” the former Democratic presidential candidate said. “Giant tech companies like Google, Apple, Facebook, and Amazon deserve the growing scrutiny they are facing, and consolidation is choking off competition across American industries.”

With Khan’s appointment, Warren added, “We have a huge opportunity to make big, structural change by reviving antitrust enforcement and fighting monopolies that threaten our economy, our society, and our democracy.”

Big Tech’s power has drawn ire from lawmakers on both sides of the aisle, and Sen. Ted Cruz, R-Texas, said during Khan’s nomination hearing in April that he looks forward to working with her.

“I think there’s a lot more the commission can do in terms of ensuring transparency from Big Tech, which right now is incredibly opaque,” Cruz added at the time.

Alex Harman, of the nonprofit consumer rights advocacy group Public Citizen, said that the “overwhelming bipartisan vote” for Khan “speaks both to her qualifications that made her the ideal nominee to serve on the FTC and the recognition by both parties that concentrated corporate power is a crisis that needs to be urgently addressed.”

From counterculture to competition, skateboarding makes its way to Olympics
New legislation would require women, like men, to sign up for potential draft
Maryland wildlife refuge fights to protect American history from climate change
Nathan Fillion gives new meaning to “arms control” as TDK in new clip from ‘The Suicide Squad’
Democrats demand answers about how FBI handled Brett Kavanaugh inquiry
Paralyzed man uses exoskeleton suit to get down on knee to propose to girlfriend