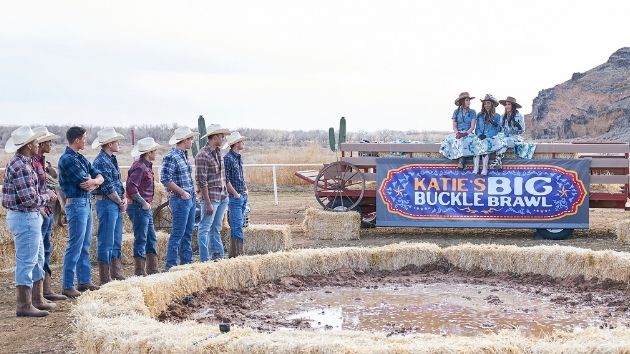 Tensions mounted during Monday’s episode of The Bachelorette as Katie Thurston began questioning her suitors if they were truly there “for the right reasons.”

First, a few date cards were handed out, starting with Christian, Garrett, Tre, Quartney, Mike P., James, Justin, Thomas, Connor B and Karl, who participated in a contest to find out who was “the greatest lover of all time.”  After warming up with a brief quiz to find out how much they really know about women, each suitor was tasked to whip up a presentation showing why he deserved the title.

One by one, the men delivered an array of risqué songs, poems and speeches, but — ironically — the winner was Mike.  The contestant, who explained last week that he is still a virgin, won Katie’s heart with his declaration that he would remain celibate for “another 30 years” to make her feel loved and secure.

Later, Tom’s earned the date rose thanks to his vulnerable conversation with Katie during the after party, where he revealed that her strength and personality is exactly what he’s looking for in a partner.

A one-on-one date went to Greg, the recipient of last week’s first impression rose.  After a fun camping date, the two opened up to each other about their respective fathers, both of whom they lost within the past few years. Katie offered him the date rose, thanking him for allowing her to share memories of her father, without crying, for the very first time.

Next up, it was John, Andrew S., Kyle, Josh, Aaron, Brendan, Hunter and Cody‘s chance to get “down and dirty” — literally — with a little mud wrestling competition.

That’s where the drama began, as a match between Aaron and Cody revealed the two had a personal vendetta against each other.  It turns out the San Diego natives knew each other prior to signing up for The Bachelorette.

When Katie pressed Aaron about the obvious tension between the two, he explained the situation, along with his belief that Cody was only on the show to become “famous.”

At the after party, Katie approached Cody about the accusation, and his nonchalant reaction raised a red flag to the Bachelorette, who immediately sent him home.  Having gotten that out of the way, she awarded the third date rose to Andrew.

After putting the Aaron-Cody situation to bed, Katie entered the pre-rose cocktail party feeling good about the evening ahead, only to have Karl ruin the mood.

Without mentioning names or details, the motivational speaker from Miami, Florida, warned Katie to watch out for some men who “didn’t have the best intentions.”

Angry and upset by the warning, Katie issued an ultimatum to her suitors: “If you are not here for me, if you’re not here for an engagement, get the f*** out.”

Key moments from the Olympic Games: Day 1
Lack of diversity in higher learning can be a problem for diverse student bodies
Chinese shooter Qian Yang wins 1st gold medal awarded at the Tokyo Olympics
New legislation would require women, like men, to sign up for potential draft
Nathan Fillion gives new meaning to “arms control” as TDK in new clip from ‘The Suicide Squad’
Paralyzed man uses exoskeleton suit to get down on knee to propose to girlfriend