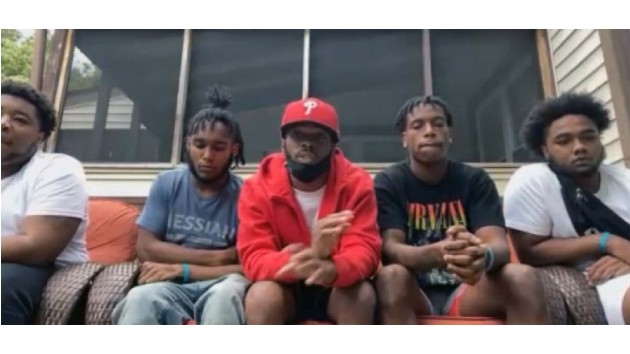 (NEW YORK) — A Black teenager at the center of a now-viral video showing an encounter with Maryland law enforcement that turned violent is urging others to stand up against police brutality.

“Don’t be afraid to stand up for what you believe in,” Brian Anderson, 19, told ABC News in an interview that aired Tuesday on Good Morning America.

Anderson, who is from Harrisburg, Pennsylvania, said he was walking with his four friends, who are also Black, on the tourist-packed boardwalk in Maryland’s coastal resort town of Ocean City on Saturday evening when they were stopped by public safety officers who asked him to not use his vape pen. According to a press release from the Ocean City Police Department, the officers saw Anderson resume vaping after informing the group of a local ordinance prohibiting smoking and vaping outside of the designated areas on the boardwalk.

Anderson and his friends claimed that he stopped vaping but kept the pen in his hand as they continued walking. One of his friends, 18-year-old Jahtique John Lewis, said they then noticed that they were being followed by the officers who “kept harassing us.”

“I asked him what was the problem and they were like, ‘Tell your boy to put his pen away,"” John Lewis, also of Harrisburg, Pennslyvania, recalled in the interview with ABC News. “As I turned around, we see public safety and police is crowding us. Next thing I know, Brian is on the floor.”

According to police, the officers approached the group again and asked Anderson to provide his identification but he refused and “became disorderly.” A large crowd of people then began to form around the officers as they attempted to arrest Anderson for failure to provide necessary ID for the violation of the local ordinance. The teen then allegedly “began to resist arrest,” police said.

John Lewis said the officers “abused their power” and tried to get Anderson’s ID “in an excessive way” as they brought him down to the ground.

That’s when Lauryn Gray, a bystander at a nearby restaurant on the boardwalk, took out her cellphone and began recording the incident. Gray told ABC News that she heard a “thud” and saw officers surrounding a man on the ground as they shouted at him to stop resisting. She said she saw one of the officers knee the man in the ribs several times after he yelled out, “What are you arresting me for?” She noted that she did not see what led up to the altercation.

In the video, which has been shared widely on social media, one officer can be heard telling Anderson to “stop resisting.” Anderson can be heard saying back, “I’m not resisting,” and, “He just kneed me, bro,” before one officer knees him forcefully several more times while a crowd of people watch and react. Bystanders surrounding the scene can be heard yelling at the officers.

Police said they “are aware of the social media videos circulating regarding this incident” and that the officers “are permitted to use force, per their training, to overcome exhibited resistance.”

“All uses of force go through a detailed review process,” the Ocean City Police Department said in the press release Sunday. “The uses of force from these arrests will go through a multi-level examination by the Assistant Patrol Commander, the Division Commander and then by the Office of Professional Standards.”

As Anderson was on the ground getting kneed, John Lewis said he asked the public safety officers why such use of force was necessary. He said a bicycle was then “thrown” at him, so he grabbed it and “threw it to the side.” Then a “scuffle” ensued, he said.

In the video, John Lewis can be seen throwing a marked police bike toward a public safety officer.

Police said the officers attempted to establish and maintain a perimeter to separate the “aggressive and hostile crowd” from the ongoing arrests. However, another member of the group, 19-year-old Kamere Day, allegedly refused to comply with orders and continued yelling profanities while attempting to approach the officers, who had placed a marked police bike in front of him and advised him to back up. Day then allegedly resisted arrest, according to police.

Day, who is also from Harrisburg, Pennsylvania, said he and his friends were “just scared at the time” and “didn’t know what else to do” because they were “attacked for no reason.” The incident is the latest flashpoint in a national debate over policing in America and excessive use of force, especially against Black men.

“I could have been killed,” he added.

Amid the chaos, another member of the group, 19-year-old Khalil Warren, was allegedly standing on private property that had two “no trespassing” signs. When the officers ordered Warren to leave, he allegedly “became disorderly” and then resisted arrest, according to the press release.

Warren, also of Harrisburg, Pennsylvania, said there was no need for the incident to escalate in the way it did.

“I feel like they could’ve just talked to us about it instead of having to be so physical,” Warren told ABC News in the interview. “There was a different way they could’ve handled that situation.”

When asked for comment on the incident, the Ocean City Police Department told ABC News: “While the use of force is never the intended outcome, our police department’s first priority is to protect and serve. They do not target based on race or age.”

Anderson was charged with disorderly conduct, resisting or interfering with arrest, second-degree assault and failure to provide proof of identity.

John Lewis was charged with disorderly conduct, failure to obey a reasonable and lawful order, obstructing and hindering, second-degree assault and resisting or interfering with arrest.

Day was charged with disorderly conduct, obstructing and hindering, failure to obey a reasonable and lawful order, resisting or interfering with arrest and second-degree assault.

Warren was charged with trespassing and resisting or interfering with arrest.

Anderson, John Lewis, Day and Warren all appeared before a Maryland district court commissioner and were subsequently released on their own recognizance, according to police

Another friend who was present during the incident, 19-year-old Gage Patterson, was arrested by the Worcester County Sheriff’s Office but the charges were unclear. He told ABC News that the officers used a stun gun on him. ABC News has reached out to the sheriff’s office for comment.

“I just feel like they went about it all wrong,” Patterson, who is also from Harrisburg, Pennsylvania, told ABC News in the interview. “It was just totally unnecessary.”

Ocean City Mayor Rick Meehan said the town government will “thoroughly investigate” the incident, as is “standard procedure” when use of force is involved.

“While the Town of Ocean City does have an ordinance that prohibits vaping/smoking on the Boardwalk, this by itself is not an arrestable offense,” Meehan said in a statement Monday. “It is a municipal infraction and subject to a fine. Refusal to comply with warnings to stop vaping/smoking resulted in the officers asking for ID to issue a citation. It was only after the individuals refused to provide identification that this became an arrestable offense.”

Anderson said he and his friends were detained overnight, as video of the incident began to circulate on social media. He said he has received “a lot of support” from his family but that they are “heartbroken” after watching the footage.

“They’re just glad that I came out alive,” he told ABC News.