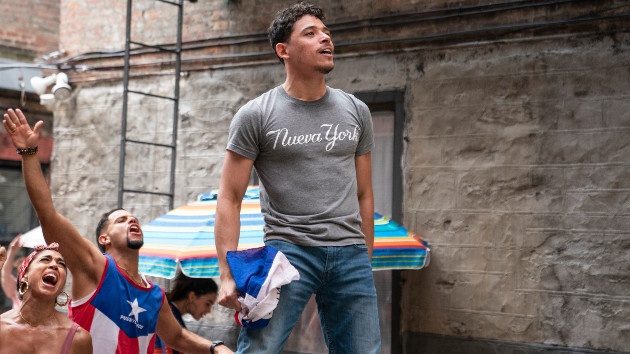 Anthony Ramos was ready to quit acting until he saw a life-changing production of In the Heights﻿, which was “the first show I ever saw on Broadway.”

Ramos tells ABC Audio, “I… wanted to quit because I just felt like there were no roles for me. No one was rushing to write the next Latino barely five-nine, freckled lead role. Like no one was trying to write a role for that guy… At least it didn’t feel that way.”

Recalling how “bummed” he felt after he didn’t book a “nonunion national tour of In the Heights,” Ramos explains why the musical — which centers on the gentrification of New York City’s Washington Heights — was personally significant to him.

“I remember sitting in that audience and seeing all these people on stage,” he says. “And I’ve seen shows before [where] I can kind of relate to [a] character… But I don’t recall ever seeing a show and feeling as connected to the characters as I did when I saw that one.”

Ramos says watching the production felt “so familiar,” including the music which he says he “grew up on.”

“I was like, ‘Maybe there’s a chance for me. Maybe I actually can do this,” he says. “And years later, I’m sitting with John Chu, having breakfast with him in L.A. And fast forward, I get the call like, ‘Yo, they want to cast you as the lead role in the movie."”

In the Heights is now available in theaters.

Patina Miller and Omar Epps explain why ‘Power Book III: Kanan’ was the perfect series for them to join
Benifer 2.0 makes it Instagram official, thanks to Leah Remini
Sean Penn won’t return to ‘Gaslit’ set without stricter COVID-19 vaccination guidelines
Chrissy Teigen thanks fans for sending the “most amazing” condolences after loss of baby Jack
Mark Wahlberg talks how being a father spurred him to star in and produce the drama ‘Joe Bell’
Tokyo Olympics opening ceremony: Best moments from the event