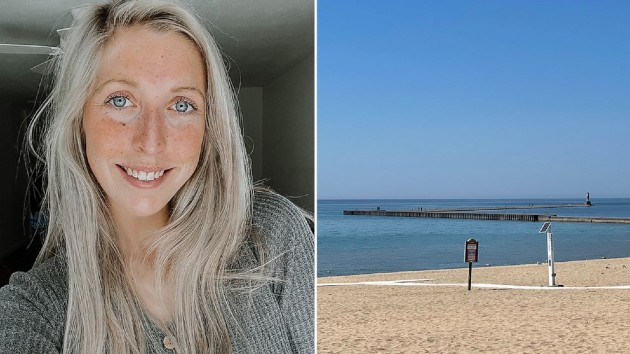 (NEW YORK) — A pregnant mom of three is sharing a message of water safety for summer after rescuing a group of young girls off the coast of Lake Michigan.

Alyssa DeWitt, 27, of Manistee, Michigan, took her three children — ages 6, 3 and 2 — to the beach one afternoon last month. She said she almost did not go that day because the wind was so strong.

“I’d packed them into the van and we sat there for probably five minutes and I wasn’t sure if we should go because the sand was whipping hard,” DeWitt told ABC News’ Good Morning America. “But I felt like we needed to go.”

Once they got to the beach, DeWitt took her kids to a spot near the pier, where she said she soon saw a group of girls in distress in the water.

“I had watched that group of girls get into the water right by the pier and I remember thinking to myself at one point that they were getting pretty far out there,” she said. “At one point I looked up and saw one girl waving her arms at me from the water.”

DeWitt said she gathered her kids and told them to stay in place while she ran to the pier to try to help the girls.

By the time she got there, she said the girls could barely keep their heads above the water as the waves crashed them into rocks.

“I called 911 immediately, but the wind was so strong that day that I couldn’t hear the dispatcher, so I didn’t know if they could hear me,” said DeWitt. “I scanned the beach to see if they could help me and there was nobody. It was just myself, my kids and that group of girls.”

DeWitt said she stayed on the line with 911 in hopes they would be able to hear something, and instinctually laid down on her stomach on the dock to try and reach the girls.

“The waves were so big that they were just getting thrown everywhere,” said DeWitt, who is five months pregnant. “I pretty much had to lean over as far as I could and pull as hard I could to get them in. There were times when a wave would come and smash us and knock the girls down and we’d have to start over.”

DeWitt recalled feeling herself slipping a few times in the water but said the fear she saw in the girls’ eyes kept her going.

“My big turning point in that entire situation was when one of the girls looked at me and said, ‘I’m going to die,"” DeWitt said. “I just got this boost of adrenaline and I looked at her and said, ‘I am not going to let you die out here. I promise you I am going to get you out of this water."”

“And I was able to pull them up over the side of that pier,” she said. “I don’t know how. It was quite crazy.”

DeWitt said she pulled three girls out of the water from the pier and then helped a fourth girl who was further inland walk back onshore.

Because DeWitt had kept 911 on the line, police and fire officials were at the beach by the time the girls were rescued.

DeWitt estimated the girls were between the ages of 9 and 15.

“No one was hurt, thankfully, but all of us were crying. There were a lot of tears and hugs shared,” she said. “It was quite a relief to have everybody out of the water.”

DeWitt shared her story on Facebook in hopes of alerting parents to the importance of water safety, writing, in part, “It can happen so fast.”

“I really hope that now that summer is here that parents are really grilling their kids about water safety and that they understand how dangerous the water is, and these piers [on Lake Michigan],” she said. “Kids think they’re invincible, but it happened so fast and [the girls] got so tired so quickly. They were very lucky that someone was there to save them.”

DeWitt made the right decision to stay out of the water and on the pier while rescuing the girls, according to Peter G. Wernicki, M.D., a Florida-based orthopedic surgeon, former lifeguard and member of the American Red Cross Scientific Advisory Council.

“We always recommend that nobody enters the water above their head unless they’re a trained rescuer because in more cases than not, the people who end up doing that unfortunately can end up drowning themselves,” he said, noting that bystanders who see someone in distress should follow the motto, “Reach, throw and don’t go.”

“If you can reach them or extend your reach with a towel or a rope or something like that, that’s perfect,” he said. “If you can’t do that, try and get something that will float, like an inner tube or a raft or an empty cooler, and throw something to them so they can hang onto it and float better and then call 911 to get someone more professional out there to help.”

In open water, people should avoid swimming within 100 feet of a pier or jetty because there is a high risk of rip currents, according to Wernicki.

In any type of water, the safest place to swim is near a certified lifeguard. Children, especially those who are poor swimmers or non-swimmers, should always wear a personal flotation device like a Coast Guard-approved life jacket, according to Wernicki.

Children should be supervised at all times in the water by an adult who is within reach of them in the water, something Wernicki calls “arms-length supervision.”

It is also recommended by the Red Cross that while in groups, like a neighborhood pool party or a family beach outing, one adult be the designated “water watcher” whose sole job is to watch the children in the pool. Adults can then rotate that responsibility in different shifts.

To help prepare for summer, the Red Cross offers a free Water Safety for Parents and Caregivers online course.