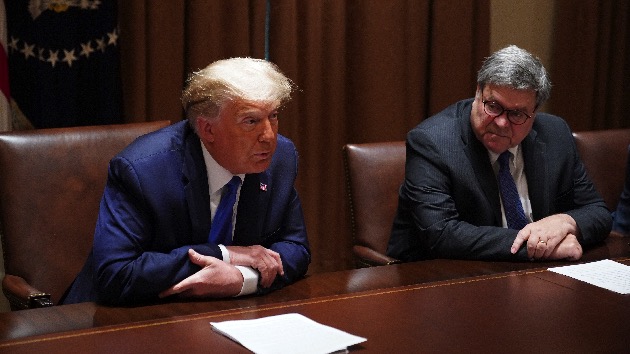 MANDEL NGAN/AFP via Getty Images
Posted on May 25, 2021 by ABC News

(WASHINGTON) — The Justice Department late Monday notified a judge it would partially appeal an order that would have required it to release the full text of a memo used by former Attorney General William Barr to justify his decision not to prosecute former President Donald Trump for obstruction of justice rising from the Russia investigation.

DOJ officials released a small, previously redacted portion of the memo but said they would fight efforts to have any more of the document made public, based on the need to keep internal DOJ deliberations about prosecutorial matters private.

The move is likely to incense some Democrats who had called on the Justice Department to go along with an order earlier this month from D.C. district judge Amy Berman Jackson, who had accused Barr and former DOJ officials of not being candid in their interactions with the court about the internal memo, and had ordered for it to be made public in its entirety.

In Monday’s late-night filing, DOJ lawyers said they would appeal any effort to disclose portions of the memo that dealt directly with Barr’s decision-making process in deciding whether Trump could have been charged based on the findings of then-special counsel Robert Mueller.

The newly unredacted portion at the top of the memo shows the top official in the department’s Office of Legal Counsel explaining the determination that Barr should make a public determination about whether Trump could be prosecuted based on the Mueller report. Department officials say the newly released material deals more with strategic deliberations among Barr and other attorneys rather than prosecutorial deliberations, which the department historically fights vigorously to keep shielded from public view.

In response to questions over his controversial handling of Mueller’s findings in 2019, Barr told lawmakers his determination there was not sufficient evidence to charge Trump was made “in consultation with the Office of Legal Counsel and other Department lawyers.” Subsequently, the watchdog group Citizens for Responsibility and Ethics in Washington (CREW) brought legal action against the department, seeking access through the Freedom of Information Act to any internal memo that Barr had based his decision on.

After a portion of the memo was made public, Judge Jackson accused Barr and other top officials of misleading the Congress and the court by saying the memo was used in “predecisional deliberations” about whether to charge Trump, when Jackson said the record showed that Barr had already made up his mind not to prosecute him.

In its recent filing, the Justice Department, now under the leadership of Attorney General Merrick Garland, said that its former briefs in the case “could have been clearer, and it deeply regrets the confusion that caused” — but that there was never any intention on their part to mislead the court.

“To be clear, the government agrees that the Attorney General was not making a decision about whether to indict or prosecute, and we regret language that was imprecise in the government’s brief and the confusion it has caused,” Deputy Assistant Attorney General Brian Netter wrote in the appeal notice. “Rather, the declarations and briefs on the whole made clear that the decision in question was whether the facts articulated by Volume II of the Special Counsel’s Report were sufficient to establish that the President had committed obstruction of justice, i.e., whether the facts constituted prosecutable conduct under the Principles of Federal Prosecution.”

The DOJ argued that Barr’s decisional process should remain a privileged communication and stood by Barr’s argument that Mueller left it open for him to decide whether to move forward in prosecuting Trump — while at the same time confirming that initiating an actual prosecution of Trump was never something Barr considered because of what are believed to be constitutional limitations on indicting a sitting president.

“The Attorney General’s determination on that point — and on what, if anything, to say to the public about that question — undoubtedly qualifies as a decision, even if it could not have resulted in an actual prosecution of the sitting President,” Netter writes. “There was no legal bar to determining that the evidence did or did not establish commission of a crime, a determination the Attorney General made and announced.”

At the same time, the Justice Department says the government “regrets that its declarations and briefs did not state expressly what was clear from the Special Counsel’s Report and the Attorney General’s letter to Congress — namely, that commencing an actual prosecution of the President was not an option the Attorney General was considering.”

The newly-unredacted portion of the memo, which was sent to Barr from then-assistant attorney general Steven Engel of the Office of Legal Counsel, shows that officials believed Barr needed to make a public determination on whether Trump’s conduct outlined by Mueller would result in criminal prosecution, separate from the constitutional limitations, given the severity of the conduct alleged by Mueller’s investigators.

“Although the Special Counsel recognized the unfairness of levying an accusation against the President without bringing criminal charges, the Report’s failure to take a position on the matters described therein might be read to imply such an accusation if the confidential report were released to the public,” Engel wrote. “Therefore, we recommend that you examine the Report to determine whether prosecution would be appropriate given the evidence recounted in the Special Counsel’s Report, the underlying law, and traditional principles of federal prosecution.”

What is a Golden Slam? Novak Djokovic looks to make men’s tennis history with Olympics
Lack of diversity in higher learning can be a problem for diverse student bodies
‘Not a moment too soon’: Native American community welcomes Cleveland baseball team name change
From counterculture to competition, skateboarding makes its way to Olympics
New legislation would require women, like men, to sign up for potential draft
Maryland wildlife refuge fights to protect American history from climate change