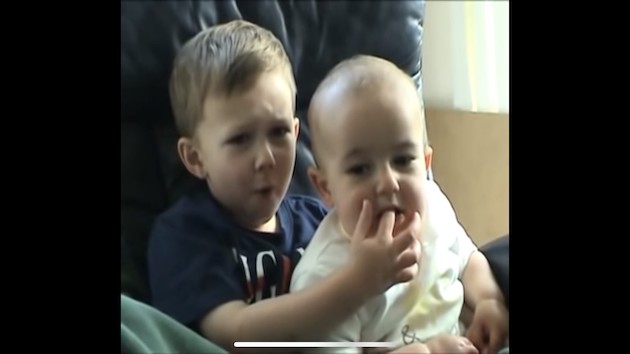 (NEW YORK) — One of YouTube’s first viral mega-hits, the beloved clip of two young British brothers known by its catchphrase “Charlie bit my finger,” has sold for some $760,999.

The video was auctioned by the family in the home movie as a non-fungible token (NFT), a unit of data stored on a blockchain ledger that certifies a permanent record of ownership for digital collectibles.

In addition to being the sole NFT holder for the video, the family also offered the winner of the auction the opportunity to create their own parody of the video featuring the original — albeit much older — stars, Harry and Charlie Davies-Carr. In the original 2007 clip, a smiley baby Charlie bites his toddler-age brother Harry’s finger.

The family shared how they plan to spend the money in a statement to ABC News that noted they were pleased with the outcome of the auction and lauded their successful partnership with NFT-sales platform Origin Protocol.

“We plan to meet with the winner to re-enact the video in person,” the Davies-Carr family said. “An important element to this auction, for Harry in particular, is that we will also be donating to carbon offset costs of mining bitcoins.”

“The rest of the money coming out of the auction will then go to a college fund for the boys,” the family added.

A bidding war broke out near the end of the NFT’s one-day auction, pushing the price higher before it was eventually purchased by an anonymous bidder going by the username “3fmusic”

The one-minute video has garnered some more than 883.5 million views on YouTube since it was posted in 2007. The clip will soon be removed from YouTube, according to a website set up for the NFT’s auction.

NFT sales have emerged in recent months as a lucrative new digital market. Earlier this year, Twitter CEO Jack Dorsey sold the first-ever tweet as an NFT for some $2.9 million.

Why this tick season may be bad — and how to protect yourself
Texas woman faces jail time after being convicted of voting illegally while on supervised release in 2016
Man who jumped off bridge to save 2-year-old girl honored by Thunderbirds
Arizona ‘audit’ becomes far-right campaign stop, fuels conspiracy that election can be overturned
Father of 8 was set to get 2nd vaccine dose, but contracted COVID-19 and died
Arizona shooting spree suspect thought people were after him for prior shooting: Police