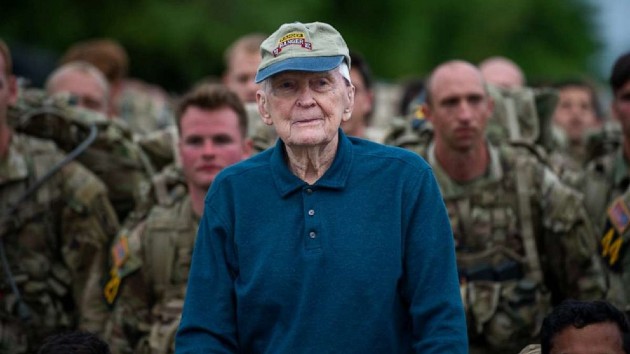 (WASHINGTON) — On Nov. 25, 1950, then-1st Lt. Ralph Puckett Jr. drew enemy fire and exposed himself multiple times to danger to allow his Rangers to find and destroy enemy positions during a multi-wave attack that would leave him gravely injured and nearly cost him his right foot.

Now, more than 70 years later, President Joe Biden will award Puckett the Medal of Honor for “conspicuous gallantry during the Korean War” — the first time Biden will bestow the honor as president.

Puckett, 94, initially received a Distinguished Service Cross for his actions on “Hill 205,” as he led the 8th U.S. Army Ranger Company. But now, after an 18-year-effort led by John Lock, a retired Army officer, that award will be upgraded to the military’s highest honor.

According to the White House, when the enemy launched a four-hour counterattack, Puckett “continually directed artillery support that decimated attacking enemy formations, repeatedly abandoned positions of relative safety to make his way from foxhole to foxhole to check the company’s perimeter, and distributed ammunition amongst the Rangers.”

“We came under motor and machine gun fire as soon as we jumped off the tanks,” Puckett recalled of the attack for an oral history project.

Puckett was injured by a hand grenade during the first wave of the attack, but continued his command, enduring an additional five rounds of attack throughout the night and sustaining debilitating wounds during the sixth.

While he told his Rangers to leave him behind and evacuate the area, they got Puckett to safety.

“First Lieutenant Puckett’s extraordinary heroism and selflessness above and beyond the call of duty were in keeping with the highest traditions of military service,” the White House said in a statement.

Puckett would go on to serve again in Vietnam as a member of the 101st Airborne Division. During his 22-year career, he received another Distinguished Service Cross, two Silver Stars for valor, five Purple Hearts for injuries suffered in combat and two Bronze Star Medals.

Puckett was also inducted to the Army Rangers Hall of Fame in 1992 and was named a 2004 Distinguished Graduate of the United States Military Academy West Point.

The Medal of Honor is the highest military decoration that may be awarded by the U.S. government, according to the Department of Defense. The award is given to “members of the United States Armed Forces who distinguish themselves through conspicuous gallantry and intrepidity at the risk of life above and beyond the call of duty.”

Lock heralded Puckett’s leadership as a standard all leaders should try to emulate, highlighting the many years of mentorship and counsel he has provided to fellow service members, and his support for a diverse military.

“Though the Army had only been desegregated by President Harry Truman two years prior, Lt. Puckett selected two African Americans to serve in the 8th Army Ranger company. Why? Because they met the standards and to quote, ‘we were all Americans, the blood was the same color: red,"”Lock said on a call with reporters ahead of Friday’s ceremony.

“Later, when women were authorized to attend the U.S. Army Ranger School, Col. Puckett was one of the first to proclaim ‘If they meet the standards, they are Rangers,"” he continued.

Puckett was informed that he would receive the honor last month by Biden, who called to share the news.

“It was quite a shock,” Puckett said of the phone call. “I never thought he’d be calling to speak to me. I was surprised by how humble and ordinary and friendly that he sounded.”

The decoration will be given on Friday, the same day the president holds a bilateral meeting with South Korean President Moon Jae-in.

Moon is scheduled to attend the ceremony — the first time a foreign leader will participate in delivering the honor, according to a senior administration official.

‘Degrassi’ alums Cassie Steele, Miriam McDonald open up about being bullied because of show
Mark Hamill opens up about why he continues to reach out to sick children
Missouri tracks spread of delta variant using wastewater
What to know about the lifeguard shortage across the US
Salma Hayek hilariously reveals how she lost ‘Matrix’ role to Jada Pinkett Smith
Taylour Paige dishes on the “iconic” origins of ‘Zola’: “It’s pretty insane”