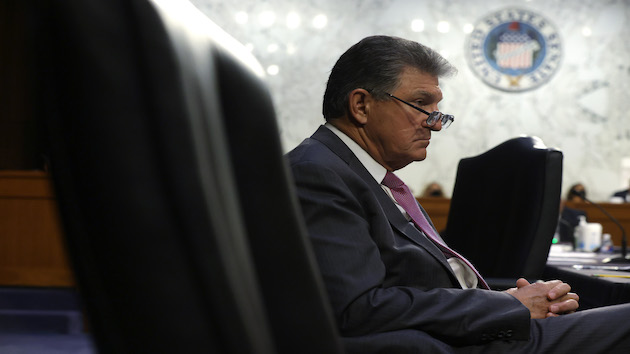 Alex Wong/Getty Images/Bloomberg via Getty Images
Posted on May 12, 2021 by ABC News

(WASHINGTON) — Sen. Joe Manchin is breaking with Democrats and throwing his weight behind a more measured voting rights bill in lieu of the sweeping Democratic voting reform bill that Majority Leader Chuck Schumer has labeled a top priority of the caucus.

The Democrat from West Virginia told ABC News exclusively that he intends to support the John Lewis Voting Rights Act, a more narrowly tailored piece of voting rights legislation that he said he believes could muster bipartisan support even as voting legislation is becoming a flash point between the two parties.

“I believe Democrats and Republicans feel very strongly about protecting the ballot boxes allowing people to protect the right to vote making it accessible making it fair and making it secure and the John Lewis Voting Rights Act, if we apply that to all 50 states and territories, it’s something that can be done — it should be done,” Manchin told ABC News’ Rachel Scott. “It could be done bipartisan to start getting confidence back in our system.”

Manchin’s announcement comes following a contentious markup of the Democrat-led voting reform act, the For the People Act, that deadlocked in the Rules Committee Tuesday.

Democrats have championed that bill as a necessary step to combat state-level changes to voting laws in largely Republican states that they say are aimed at oppressing largely minority, poorer and young voters.

Republicans have vowed to oppose it. Minority Leader Mitch McConnell branded it as “one party takeover of our political system.”

Manchin said Tuesday’s mark-up made clear to him that the robust Democratic bill, which he has already said he does not support, has no hope of mustering the necessary 60 votes to pass.

“No matter what was brought up it was partisan vote, 9-9,” Manchin said. “This is one of the most — I think — important things that we can do to try to bring our country back together and if we do it in a partisan way, it’s not going to be successful I believe.”

For weeks Manchin has said he believes the Democratic proposal is too sweeping. The John Lewis Voting Rights Act takes a narrower approach to voting reform.

Its key objective is to put back in place key measures from the Voting Rights Act of 1965 that the Supreme Court overruled in 2013. The bill implements a federal process for reviewing changes to voting rules in any jurisdiction nationwide, with an eye toward measures that are historically discriminatory.

The bill passed the House last session but was never brought to a vote on the Senate floor.

So far no Senate Republican has come out to back that legislation, but Manchin said he’s spoken to GOP colleagues and he sees a path forward.

He vowed that he would not bring the he bill to the floor for consideration unless it has bipartisan backing.

He’s so committed to working in a bipartisan way that he’s vowed not to use other measures that would allow the Senate to pass the legislation with a simple majority.

For example, Manchin said he won’t support the use of reconciliation, a procedural tool that allows the Senate to bypass the usual 60-vote threshold necessary to pass legislation, to move the John Lewis Voting Rights Act.

He also won’t support a one-time change to the Senate filibuster rule, despite pleas from some advocates.

“If you do it for one time you basically destroy the Senate as we know it,” Manchin said.

Manchin encouraged the normal use of the committee and amendment process. He called use of that process on the For the People Act encouraging but said Democrats ought to look to where they can move forward with common ground.

“If you have another pathway forward why don’t you take that?” he said.

Manchin has met with House Majority Whip Jim Clyburn, and Sen. Raphael Warnock, D-Ga., in recent weeks to discuss his stance on the Senate filibuster.

Manchin called those lawmakers “very good patriots” who have informed his position on the matter.

“It’s about the country,” Manchin said. “It’s about the fairness of the system. If the voting system in our country can’t be secure and it can’t be open and accessible to everybody and protected for everybody, no matter what your race, no matter what preference, you have — you have not only a right but a responsibility to vote and we shouldn’t make it difficult for you.”