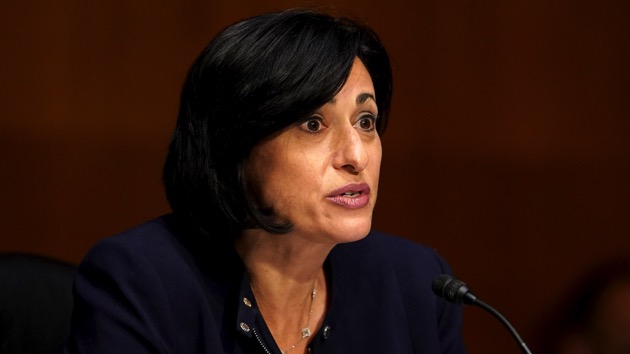 (WASHINGTON) — Centers for Disease Control and Prevention Director Dr. Rochelle Walensky was forced to defend her agency’s guidance and even its integrity on Tuesday as Senate Republicans grilled her over CDC messaging on masks and other restrictions, arguing it’s frustrating and unreasonable as more Americans get vaccinated.

The Senate Health Committee hearing came hours after the Food and Drug Administration authorized coronavirus vaccinations for children ages 12 and up, widening the U.S. population that will be protected against the virus and bolstering chances for a safe return to full-time school in the fall.

Asked what she would say to parents who are considering getting their kids vaccinated now, the CDC director, while acknowledging some parents may not want to be first in line, said she would encourage all parents to get their children vaccinated and for children to ask for the shot.

“I recognize some parents want to see how it goes, but I am encouraging all children to be vaccinated. And I am also encouraging children to ask for the vaccine,” Walensky said. “I have a 16-year-old and I continue he wanted to get the vaccine. He wants his life back.”

The hearing then quickly heated up over what critics say is her agency’s murky messaging, a point Republican Sen. Susan Collins drove home by saying she “used to have the utmost respect for the guidance from the CDC.”

“I always considered the CDC to be the gold standard. I don’t anymore,” Collins said, going onto to tick through what she called “conflicting, confusing guidance” from the CDC that contradicts health officials.

Walensky, forced to respond, stood behind CDC guidance that she said is developed with “stakeholders and consumers” before being finalized, defended school recommendations by pointing to immunocompromised populations and got personal when responding to criticism about whether kids at summer camps need to wear masks.

“I want our kids back in camp,” she said, talking about how her 16-year-old son counts down the days to his summer camp each year. “We now have 38,000 new infections, on average, per day. Last May 11th, it was 24,000. And we sent a lot of kids home and camps were closed. The camp guidance is intended to get our kids to camp and allow them to stay there.”

Republican Sen. Bill Cassidy joined Collins in expressing frustration with the CDC and told the panel the American people “are beginning to disregard what you say is true.”

“The American people have just lost — just lost patience with us, with you guys. I would ask you to be aware of their frustrations and get a little real time into updating these things. I am sorry to be so frustrated,” Cassidy said.

Republican Sen. Lisa Murkowski expressed frustration at what she said were CDC roadblocks for Alaskan cruise ships. On masks, she said fishermen in her state dangerously keeping ocean-soaked masks on at all times out of fear the Coast Guard would cite them for violation of federal law.

“Tell me, tell me how anybody thinks this is a sane and sound policy to do,” Murkowski said. “This absolutely is a crazy policy,” she added of workers on boats having to wear masks outdoors.

Democratic Sen. Chris Murphy came to the CDC’s defense, saying Walensky and other experts aren’t going to say we know things that we don’t and said they’re working in the aftermath of former President Donald Trump who made egregiously false statements about the virus.

“I, frankly, appreciate the fact that we have leaders today who recognize that we still have gaps in information, who occasionally may err on the side of caution in order to save lives. And I share the frustration, but the frustration is rooted in the fact that we are still less than a year and a half into a virus that we are still beginning to understand,” Murphy said.

Earlier, when it was Republican Sen. Rand Paul’s turn, it didn’t take long for him to drill the nation’s top infectious disease expert, Dr. Anthony Fauci, over his handling of the pandemic — as he has in hearings since the pandemic began — in a heated line of questioning on the origin of the virus.

Paul pushed the unverified claim that the virus originated in China’s Wuhan Virology Institute. He demanded that Fauci admit that the National Institutes of Health specifically funded “gain-of-function research” at the Wuhan Institute of Virology — a type of controversial research that involves boosting a virus so that vaccines or cures can be developed proactively, but which Paul said was “fooling with Mother Nature.”

Fauci shot down the theory as unequivocally false.

“Senator Paul, with all due respect, you are entire — entirely and completely incorrect. The NIH has not ever and does not now fund gain-of-function research in the Wuhan Institute of Virology,” Fauci said. “I fully agree you should investigate where the virus came from, but again, we have not funded gain of function research on this virus in the Wuhan Institute of Virology.”

He told Paul that while the NIH has funded research at the Wuhan Institute of Virology in the past, it was not for gain-of-function research, “despite the fact that people tweet that.”

Fauci also shot down a hypothetical question from Republican Sen. Roger Marshall of Kansas on whether some NIH funding could have ended up contributing to COVID-19.

“You could do research on something as benign as looking at something that has nothing to do with it and it could indirectly, someday, somehow be involved,” Facui said. “So if you want to trap me into saying yes or no, I’m not going to play that game.”