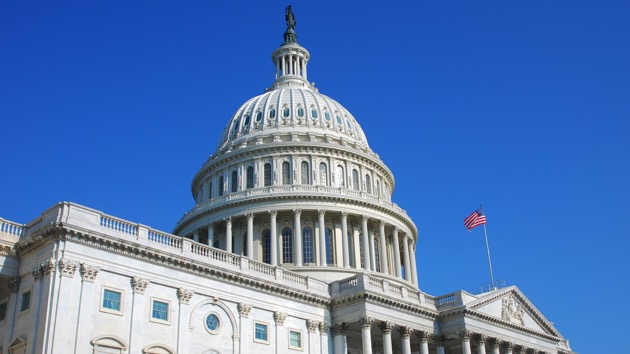 (WASHINGTON) — House Republicans are forging ahead this week with their plan to oust Wyoming Rep. Liz Cheney from her post as GOP Conference Chair, illustrating the tight grip former President Donald Trump continues to hold over the Republican Party exactly six months after the presidential election he continues to falsely claim was stolen.

Cheney’s refusal to side with Trump and other Republicans on what she’s called “the big lie” and her vote to impeach the former president for his role in the Jan. 6 Capitol attack has made her an outlier in her party, and while it’s not the first time this year she’s faced an internal challenge, it will be the first time she’s facing one without the support of Republican leadership.

House Minority Leader Kevin McCarthy over the weekend publicly endorsed four-term New York Rep. Elise Stefanik, making all but certain Cheney will be stripped of her role as soon as this week. McCarthy follows the No. 2 House Republican Rep. Steve Scalise of Louisiana in voicing support for Stefanik.

Cheney has not responded to McCarthy, but least one House Republican who joined Cheney and eight other House Republicans in voting to impeach Trump, Illinois Rep. Adam Kinzinger, went after House leadership on Monday and said Cheney is being run out of her post for only one reason: because she is consistent in her message and refuses to lie about the truth.

“I think when it comes down to it,” he told the National Press Club Monday, “what she is being removed for is making it uncomfortable and being consistent, and God bless her for having the consistency to tell the truth. Because history — I’m going to tell you, in the longterm — is going to write very well about her.”

“She’s being run out for one thing: her consistency. She said the same exact thing that Kevin McCarthy said on Jan. 6 which is Donald Trump is responsible,” Kinzinger added.

In addition to describing McCarthy as hypocritical, Kinzinger said the Republican speaker dismissed his own warnings about violence in the days ahead of Jan. 6.

Stefanik, poised to replace Cheney, was among the 147 Republicans who voted to overturn election results and defended questioning results in a floor speech after the Capitol attack and has expressed full support for the controversial Republican-backed audit of election results in Arizona, which election experts have worried will further undermine confidence in the electoral process.

Asked on Fox News’ “Sunday Morning Futures” whether he supported Stefanik for the No. 3 House Republican position, McCarthy said, “Yes, I do,” and pointed to what he said GOP messaging should be.

“Any member can take whatever position they believe in,” McCarthy said, denying Cheney’s ousting was based on her criticisms of Trump. “What we are talking about, it’s a position in leadership. We are in one of our biggest battles ever for this nation and the direction of whether this century will be ours. As conference chair, you have the most critical jobs of the messenger going forward.”

Republicans are expected to vote Wednesday during a House conference-wide meeting to remove Cheney, the daughter of former Vice President Dick Cheney, and replace her with Stefanik, nearly 20 years her junior with a more moderate voting record than Cheney, who once avoided saying Trump’s name but became one of his staunchest supporters.

“The president knows that there is some introspection going on in the Republican Party right now, and a determination about who they’re going to be, who they want to lead them, and what they want to represent moving forward. He’s not going to focus on that,” White House press secretary Jen Psaki said Monday, denying that the situation would influence Biden’s thinking as he heads into his first in-person meeting Wednesday with McCarthy and congressional leaders.

Ahead of his weekend endorsement of Stefanik, McCarthy last week was overheard saying he has “lost confidence” in Cheney. The pair shared an awkward moment on Capitol Hill in late February when they disagreed responding to a reporters’ question over whether Trump should speak at CPAC, the Conservative Political Action Conference.

Trump also weighed in last week from Mar-a-Lago — the once “Winter White House” which has still seen prominent GOP figures visit since Trump left office, McCarthy included — to criticize Cheney in a statement as a “warmongering fool who has no business in Republican Party Leadership” and endorse Stefanik as “a far superior choice.”

Stefanik, in a recent interview with former Trump adviser Sebastian Gorka, took her own jab at Cheney, saying the House Conference Chair’s job “is not to attack members of the conference and attack President Trump.”

In February, when Cheney faced another challenge to boot her from the coveted leadership position due to similar circumstances, even Senate Minority Leader Mitch McConnell spoke up to defend the congresswoman as “a leader with deep convictions and the courage to act on them,” and Cheney kept her role after a closed-door, secret-ballot vote: 145-61.

Now, although Cheney isn’t backing down from the next imminent challenge, she is not openly fighting the move, either. Branding herself as an “unapologetic conservative,” she has continued to warn there are consequences if the GOP continues to push Trump’s big lie.

Late last Wednesday, she published an opinion piece in The Washington Post laying out her case, writing, “The Republican Party is at a turning point, and Republicans must decide whether we are going to choose truth and fidelity to the Constitution.”

“History is watching. Our children are watching. We must be brave enough to defend the basic principles that underpin and protect our freedom and our democratic process. I am committed to doing that, no matter what the short-term political consequences might be,” she said.

Biden to use summit to talk directly, clearly with Putin about differences: Blinken
Majority of Americans trust Joe Biden to negotiate on US behalf with foreign counterparts: POLL
Soccer star Christian Eriksen sends ‘greetings’ to teammates after Euro 2020 collapse
French President Macron says US is ‘definitely’ back, welcomes Biden to ‘the club’
What to know about the Delta COVID-19 variant first detected in India
Man charged with hate crime after verbal, physical assault on family of Asian descent