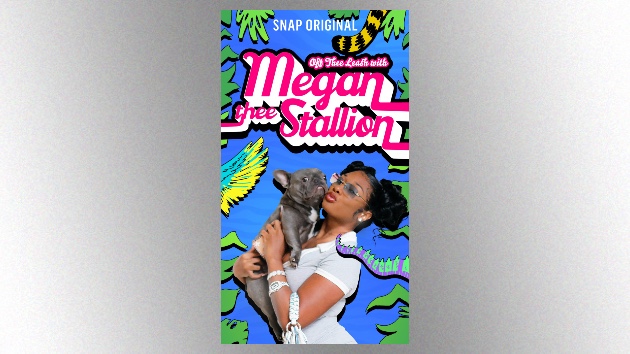 Courtesy of Snapchat Originals
Posted on May 5, 2021 by ABC News

Snapchat has announced a slew of new original shows, including a pet series with dog lover Megan Thee Stallion.

The “Savage” rapper will be joined by a number of celebrity friends and their pets in the unscripted series, Off Thee Leash with Megan Thee Stallion, from Will Smith‘s Westbrook Media company. The flyer features Megan and her french bulldog, known as frenchie4oe on Instagram.

The series may also include Megan’s other fur babies named Dos, 5ive and X, the latter of whom she adopted last September.

Off Thee Leash With Megan Thee Stallion joins the 128 Snap Original series that launched last year. Each episode is typically five minutes long, attracting over 400 million views including 93% of the Gen Z population in the U.S., according to Snapchat.  The new Snap Originals series will address issues “most important” to Generation Z and shed light on everything from “social issues and racial injustice, to honest conversations on mental health and climate change.”

Other new series include Coming Out from actress Chloë Grace Moretz, the futuristic drama Breakwater, and the personalized sketch comedy series The Me and You Show.

Ewan McGregor’s daughter Clara is all smiles at movie premiere after suffering a dog bite to her face
Tailoring climate change messaging for conservatives could shift understanding of crisis: Study
‘In the Heights’ debuts to disappointing $11.4 million; ‘A Quiet Place Part II’ regains the top spot
How a possible ban on spectators at Tokyo Olympics could impact athlete performance
$28M is winning bid for seat aboard Blue Origin’s 1st human space flight
Toddler falls from window of home, mauled to death by family’s 2 pit bulls when he lands