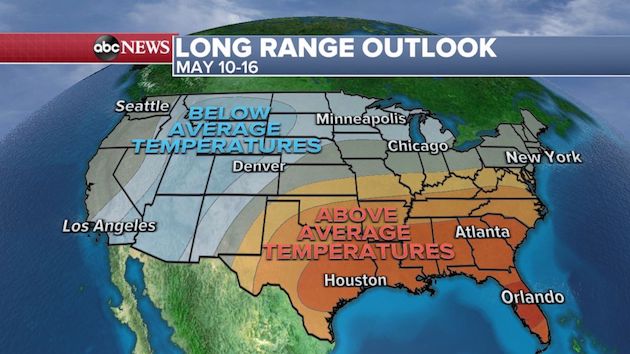 (NEW YORK) — The May 2 tornado outbreak comes after an extremely quiet April for severe weather.

Over the weekend, the National Oceanic and Atmospheric Administration Storm Prediction Center tweeted that April 2021 saw the fewest reported tornadoes since 2000. April also had the fourth fewest tornado watches on record.

There were 155 tornadoes in April across the U.S., many of them occurring in the central and southern plains. April 21 saw just 73 reported tornadoes, less than half of the monthly average.

Compare this to March of 2021, when there were 191 reported tornadoes across the U.S. — more than double the average number of twisters for the month. March typically averages 80 tornadoes.

Last April, there was a single outbreak of 140 tornadoes from Texas to Maryland. The outbreak was the deadliest since 2014. April 2020 would ultimately have over 350 reported tornadoes.

Although severe weather was notably low through April, on the evening of April 28, a round of severe weather led to large hail in parts of the Dallas/Fort Wort, San Antonio and Oklahoma City metro areas. The hailstorms, which contained hail up to the size of a softball, caused significant damage to cars and homes.

The beginning of May got off to an active start on the evening of May 2, when 23 tornadoes were reported across four different states.

May typically is a month when severe weather rapidly escalates, especially across the southern and central Plains.

An essential ingredient for tornadoes in the Great Plains is the meeting of moist warm air and cooler dry air. A look at the Climate Predictions Center temperature outlook for the middle of the month shows that this will occur in the central U.S. While the magnitude of the severe weather remains to be seen, it is looking more likely that the weather pattern will be conducive to more frequent severe weather events, as expected, as we head toward the middle of the month.

Why this tick season may be bad — and how to protect yourself
Texas woman faces jail time after being convicted of voting illegally while on supervised release in 2016
Arizona shooting spree suspect thought people were after him for prior shooting: Police
Judge sides with Florida in cruise lawsuit, says CDC overstepped authority
Murder suspect in alleged road rage shooting denied bail for posing ‘complete danger’: Judge
Elisabeth Moss’ “first love” is acting, but the director bug bit her hard in Season 4 of ‘The Handmaid’s Tale’