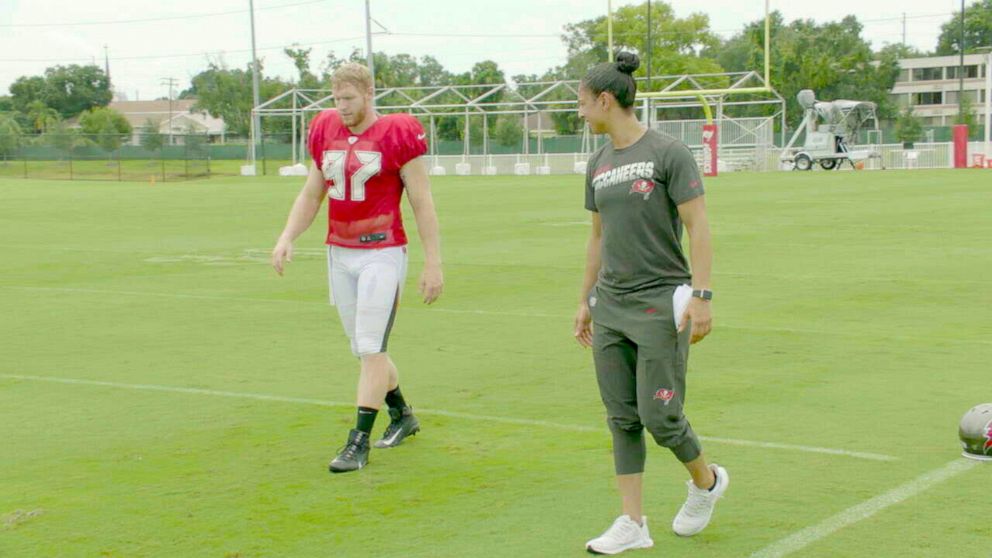 Courtesy of the Tampa Bay Buccaneers
Posted on April 30, 2021 by ABC News

(NEW YORK) — On NFL pro days, athletes from colleges across the country perform their best in front of NFL representatives in hopes of getting drafted into the league. But in a sport that’s dominated by men, during pro day at Oklahoma State University earlier this month, it was a woman who took center stage.

Kelli Masters, an NFL agent, is paving the road for more women to enter the $16 billion football industry. She was at Oklahoma State University to watch her client, NFL prospect Tylan Wallace, perform drills from the sidelines.

“He is one of the most exciting and prolific wide receivers in this draft class. I am excited about his future,” Masters told “Nightline.” “I’d love to see him drafted in the first round. I believe he will go high, either day one or day two.”

Masters is among a growing number of female power players in the league, although they’re still outmatched — for now. Of the 400 license agents in the NFL, only 34 are women.

“It never crossed my mind that women didn’t do this — that women didn’t become sports agents — and when I was first confronted by a male agent who told me why women didn’t belong in the industry, I thought that was the craziest thing I’d ever heard,” Masters said. “In those early years when there were just two or three women that were representing NFL players, I felt like I spent a lot of time defending myself, a lot of time trying to explain why a woman could do this.”

In the 15 years since then, Masters has represented dozens of clients and she has even launched her own agency, KMM Sports.

As for that male agent who seemed to discourage her, she says they’ve now become friends.

“We have actually co-represented players together in the years since then, and I give him a little grief for that now,” she said.

But women aren’t only making behind-the-scenes moves in the NFL. In fact, 2020 was a banner year for women in the league.

At Super Bowl LV, Lori Locust and Maral Javadifar helped see the Tampa Bay Buccaneers to victory. At the same time, referee Sarah Thomas made history as the first woman to officiate a Super Bowl.

“This is not a career where you decide on a Thursday that you want to be a coach in the NFL and next Tuesday you’re on the field,” Locust, an assistant defensive line coach, said.

Thomas said she officiated in small leagues and school sports for years before working her way up to becoming an NFL referee.

“When I started officiating the peewee level, the little jamborees on Saturday mornings and the [junior varsity] games and the varsity high school games, I just fell in love with that. I had no idea that there was an NFL possibility. None,” Thomas said. “I’ve put in the time. I mean, I believe I did 17 or 18 seasons … peewee, high school, junior high and college, and then got into the NFL.”

While no one’s path to the NFL is easy, for women there’s an additional challenge.

“When I first got into officiating, of course, I had the largest learning curve. I’d never played the sport,” Thomas said.

Locust says building friendships with other women in the league has helped her feel a sense of community.

“I’ve tried to maintain a relationship with the other women coaches in the league because I feel it’s very important to have a framework as far as we go because the guys sort of have always had it,” Locust said. “They’ve played football from a young age. They’re able to say, ‘Oh, yeah, I went to school with him or I coached his kid when he was in college or I played with him in the league,’ and they have these levels of connection. And I think what we’re doing is we’re trying to build that now. “

Today, out of the nearly 800 coaches in the league, only eight are women. Thomas was the only woman referee in the league until this spring when Maia Chaka was added to the NFL’s referee roster.

Despite being pioneers in their respective fields, Locust, Thomas and Masters all said that shattering the glass ceiling had actually been their second act.

Locust said she worked in insurance for 25 years. She said she was around 40 years old when she first thought about working with football after an organized women’s football team came to her hometown of Harrisburg, Pennsylvania. She decided to give the game a try; a move that ended up changing the course of her career.

Thomas, meanwhile, traded a pharmaceutical career for a life on the field, she said.

“I played collegiate basketball at the University of Mobile and then afterward I would always play pickup games with my brothers,” Thomas said. “We had been in this one church basketball league and I got kicked out of that church league because I was a female. So, the first time since 5 years of age I was sports-less. When I asked my brother, I was like, ‘What are you doing tonight?’ And he said he was going to a football officials meeting, and I just said, ‘Can girls do that?’ And he said, ‘I guess.’”

Masters said that before she entered the football world, she worked in broadcast journalism and practiced civil litigation.

Javadifar, also known as MJ, played college basketball before finding football. For her, coaching was a natural career choice after suffering an injury that left her unable to play.

“The summer of my junior year, I tore my ACL and it was a devastating injury for me, and that was the time when I realized there’s a seamless or important connection between rehab and training,” she said. “I always wanted to be on the sidelines and give other athletes the same opportunity that I had at getting back to their game.”

Javadifar turned a roadblock in her career into a building block by becoming a strength and conditioning coach. Her hard work paid off and she landed a job with the Tampa Bay Buccaneers.

“Prior to accepting the job with Tampa Bay, I had received an offer from another sports organization and it just didn’t fit right. … I didn’t have another option after I turned it down,” she said. “But to me, I think I made one of the best decisions and hardest decisions of my life because it was a step for me to put my foot in the door.”

Her decision to turn down that team paid off. At this year’s Super Bowl, the Buccaneers won their second championship title, beating the Kansas City Chiefs 31-9.

“I don’t think it hit me truly until probably a couple of days after, when I sat there and we watched some of the highlights of our game and realized the end score,” Javadifar said.

“It wasn’t really until the start of the fourth quarter that I realized that they had not yet scored a touchdown against us… So it kind of was like, wow, is this really possible? Is this going to happen?” Javadifar added.

Despite making history coaching and officiating the Super Bowl, for Thomas, Javadifar and Locust, it was just another game day.

“If we bumped into each other, it was just because I was doing my duties and they were doing their duties,” Thomas said. “I didn’t see MJ till after the game. And it’s just it speaks volumes to their caliber as coaches, not as female coaches, but they’re doing a job.”

“I think Sarah looked over during the game and said hello, but I was so locked in that I think I may have ignored her by accident until later,” Javadifar said.

The Buccaneers are not just Super Bowl champions; the team is also pushing for meaningful change in diversity.

“The Buccs foundation has committed $250,000 to a girl’s football scholarship. We couldn’t be more excited about the commitment that the organization makes to this resurgence of girls playing football,” Locust said. “Flag football in Florida is huge. It’s a varsity sport. I wish they would have had it when I was younger.”

Speaking to other women seeking to break into the NFL, these trailblazers’ offered some advice: Put in the work and prove yourself.

Locust, Javadifar and Thomas hope their work elevating women in the NFL will help break some of the last remaining barriers in the league.

“We’re all here to win and we’re all here to make them better in whatever aspect,” Locust said of the players. “So it’s not to diminish the fact that we’re women because, like MJ said, clearly we’re women. But you assume a role of coach and that shouldn’t have a label or a specific gender attached to it. I think we are working very hard toward a day when you don’t have to hear ‘female coach.’”

“I am just ready for the day that girls don’t have to ask, ‘Can girls do that?’” Thomas added, hoping that one day they’ll “just know it’s already been done. There’s not the ‘first’ to happen again.”