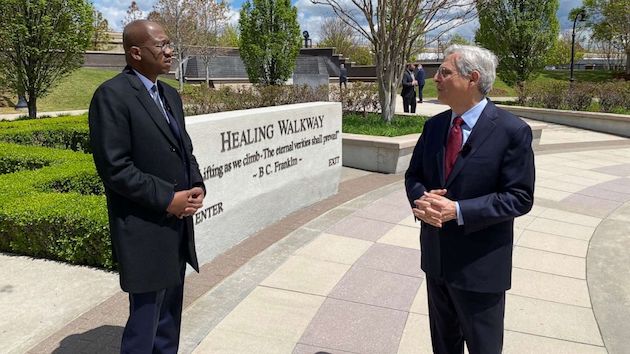 (TULSA, Okla.) —In his first trip as the nation’s top law enforcement official, Attorney General Merrick Garland visited the sites of two of the worst domestic terrorist attacks in U.S. history — an effort he said was intended to highlight what happens when racial hatred drives individuals to carry out unspeakable acts of violence against their fellow Americans.

In an exclusive interview with ABC News Chief Justice Correspondent Pierre Thomas in Tulsa, Oklahoma — which next month will mark the 100th anniversary the nation’s worst race massacre — Garland sought to tie the attacks by a white mob against the city’s Black residents to the bombing of the Alfred P. Murrah federal building in Oklahoma City 26 years ago.

“This is a moment where it’s important, you know, to come to a place like this,” Garland said. “The kind of devastation that happened here is — the product of the same kind of hatred that led to the bombing in Oklahoma City.”

And Garland acknowledged some of the same hatred is still at play today, fueling an alarming resurgence in violence from white supremacist extremists.

Garland played a major role in the investigation and prosecution of Timothy McVeigh and Terry Nichols, two domestic terrorists convicted for their role in the bombing that took the lives of more than 168 people and injured hundreds more.

McVeigh, who was put to death in 2001, was a Gulf War veteran who the FBI has said was motivated by a desire to overthrow the U.S. government and had described members of the white power movement as his “brothers in arms.”

Garland, a grandson of immigrants who fled anti-Semitism in Russia and found safe harbor in the United States, grew tearful in his interview with ABC News as he reflected on his family’s background and how he said it informs his actions as a public servant.

“All of us in our family feel an obligation, public service and try to protect other people the way the country protected us,” Garland said. “That makes the job at the Justice Department to ensure equal justice under law for all American citizens.”

Garland on Monday attended the 26th anniversary service at the Oklahoma City National Memorial and then participated in the first sit-down interview of his tenure with ABC News — portions of which will air across ABC News platforms including “World News Tonight with David Muir” on Monday and “Good Morning America” on Tuesday.