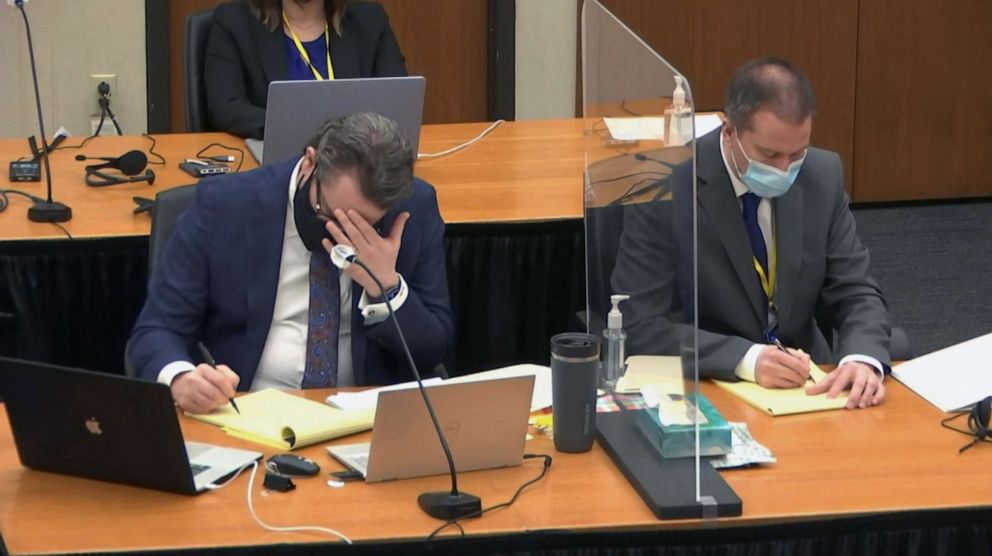 (MINNEAPOLIS) — Prosectors wrapped up their case in the murder trial of Derek Chauvin on Tuesday after calling 38 witnesses and presenting numerous videos to argue that the former Minneapolis police officer and his colleagues allegedly caused the death of George Floyd last year.

“The state of Minnesota rests,” prosecutor Steve Schleicher said at the beginning of court proceedings.

Chauvin’s attorney, Eric Nelson, then set out to work on trying to undermine the prosecution’s case and take his best shot at instilling reasonable doubt in the minds of jurors. He called a slate of witnesses in rapid succession, including a police use-of-force expert who testified Chauvin was justified and acted reasonably in the amount of force used on Floyd.

Barry Vance Brodd, a consultant on police practices and use of force, testified as a paid expert witness for the defense.

Brodd — who served as a police officer for 29 years, most of that time with the Santa Rosa, California, Police Department — testified that he spent roughly 60 hours reviewing the evidence in the case, including numerous police body camera, surveillance and bystander videos.

Asked by Nelson if he had formed an opinion about the type of force Chauvin used on Floyd, Brodd said, “I felt that Derek Chauvin was justified, was acting with objective reasonableness following Minneapolis Police Department policy and current standards of law enforcement in his interactions with Mr. Floyd.”

Brodd, certified by the FBI as a police defensive tactics officer, said that, in his opinion, the use of force used on Floyd was not deadly force. He said because Floyd initially resisted getting into a squad car, the use of force to take him to the ground and place him in the prone position was appropriate.

“I don’t consider a prone control as a use of force,” Brodd said, explaining that keeping a person in the prone position would prevent them from choking if they vomited and is the best position to avoid inflicting pain.

He also noted police body camera video showing Floyd kicking one of the officers restraining him when he was on the ground.

“I felt that officer Chauvin’s interactions with Mr. Floyd were following his training, following current practices in policing,” Brodd said, “and were objectively reasonable.”

Under cross-examination from Schleicher, Brodd conceded that if officers inflict pain on a person who is being held in the prone position, it could constitute a use of force.

Brodd also agreed that placing a person in the prone position could lead to positional asphyxiation, saying it’s been known for decades in law enforcement nationwide as a risk and that he has taught officers to be aware of it in his training courses. He said a person should be placed on their side at the first sign it appears they are in distress.

Schleicher played a video clip of Floyd being held down and saying, “my stomach hurt, my neck hurt, everything hurt” and asking for water.

“That would be some sort of an expression of pain, fair?” Schleicher asked.

Brodd responded, “It could.”

“When you reviewed the facts and evidence in this case, at any time do you recall noting Mr. Floyd saying, ‘my neck hurts’?” Schleicher asked.

“I heard it. I did not necessarily note it,” Brodd replied.

The first defense witness Nelson called was retired Minneapolis police officer Scott Creighton, who testified about a May 6, 2019, arrest of Floyd that had similarities to his fatal arrest nearly a year later.

Before Nelson began playing a portion of the police body camera video from the 2019 arrest in Minneapolis, Hennepin County District Court Judge Peter Cahill told the jury the footage was only being used to illustrate Floyd’s reaction to being on opioids and should not be considered evidence of his character.

The video showed Floyd sitting in the passenger seat of a vehicle and Creighton approaching his window with his gun drawn, ordering Floyd to show his hands and place them on the dashboard. Another officer on the driver’s side of the vehicle ordered Floyd to put his hands on his head and to spit out something he had apparently put into his mouth. The officer threatened to deploy a stun gun on the 46-year-old Black man.

The segment of the video ended with Floyd being placed into handcuffs and saying, “I apologize, man.”

“His behavior was very nervous, anxious,” Creighton said of Floyd, prompting an objection from prosecutors, and Cahill struck the answer from the record.

During cross-examination, Creighton said the incident “escalated real quick” and that he drew his gun because Floyd was not initially showing him his hands.

“Me and another officer had to forcibly handcuff him,” Creighton testified.

Asked by prosecutor Erin Eldridge if Floyd ever collapsed during the incident, Creighton answered no.

“Mr. Floyd didn’t drop dead while you were interacting with him, right?” Eldridge asked, apparently to demonstrate how different that incident was from the May 25, 2020, arrest of Floyd.

The jury was not informed why Floyd was arrested during the traffic stop or if he was ever charged with a crime.

In his opening statement in the trial, Nelson told the jury the evidence would show that Floyd died from a combination of heart disease and an an overdose of fentanyl and methamphetamine, drugs found in his system during an autopsy. Prosecutors allege Chauvin killed Floyd by digging his knee into the back of the handcuffed man’s neck as he was being held in a prone position on the pavement with the help of two other officers, Thomas Lane and J. Alexander Kueng.

Nelson called Michelle Moseng to the witness stand. Moseng is a retired Hennepin County paramedic who responded to the 4th Precinct police station in Minneapolis, where Floyd was taken following his 2019 arrest.

Moseng said she examined Floyd and took his vitals, saying that while his blood pressure was high, he had a normal heart rate and respiratory rate.

Under questioning from Eldridge, Moseng testified that while speaking to Floyd, he told her that he had taken seven to nine Percocet pills, an opioid containing the pain reliever oxycodone. She said Floyd told her he took one of the pills as police officers approached the vehicle he was in.

“I asked him why?” Moseng testified. “He said it was because he was addicted.”

She described Floyd as being alert and obeying commands when she spoke to him.

Eldridge asked Moseng if she was aware that after taking Floyd to the hospital, medical staff monitored him for two hours and then released him. Moseng said she didn’t know that.

Shawanda Hill, who described herself as Floyd’s ex-girlfriend, testified for the defense that she ran into Floyd at a Cups Food store in South Minneapolis on May 25, 2020, and that Floyd offered to give her a ride home. At the time, Floyd was with Morries Hall, a friend of Floyd’s who has been identified during trial testimony as a suspected drug dealer from whom Floyd obtained narcotics.

Hill described Floyd as appearing “happy, normal, talking, alert” when she encountered him in the store. She said Floyd told her “he was tired because he had been working.”

Hill testified that she, Floyd and Hall got into a Mercedes-Benz SUV that Floyd was driving. She said Floyd fell asleep about 8 minutes after they got into the car parked outside the store, and that she and Hall attempted to wake him up several times, including when store employees came out to confront Floyd about allegedly using a fake $20 bill to buy cigarettes.

“He’d wake up, say something, made a little gesture and nodded back off,” Hill said.

She was asked by Nelson if she tried to wake Floyd again when two police officers, Lane and Kueng, approached the car and one of them drew his gun on Floyd’s side of the vehicle.

During cross-examination, Hill said she told Floyd, “‘Baby, that’s the police. Roll down the window."”

She said she never heard Floyd complain of shortness of breath or chest pains, telltale signs of a sudden heart attack.

Minneapolis Park Police Officer Peter Chang testified for the defense that he responded to the Cups Food store after hearing a radio dispatch requesting backup.

Nelson played footage from Chang’s body camera that showed him arriving on scene just as Lane and Kueng radioed a “code 4,” meaning they had a suspect in custody and that the situation was under control.

Chang said that when he first arrived, one of the officers had Floyd handcuffed and seated on the sidewalk outside the Mercedes-Benz SUV and that one of the officers asked him to confirm Floyd’s name and date of birth. He said when Lane and Kueng walked Floyd across the street to their squad car, one of them instructed Chang to watch the SUV to make sure no one tried to enter it.

Nelson played for the jury a 20-minute video from Chang’s body camera, mostly showing Hall and Hill standing outside the vehicle smoking and appearing to express alarm as they noticed a crowd near the squad car where Floyd was taken and commenting that a number of bystanders appeared to be recording video on their phones.

“They were very aggressive, aggressive toward the officers,” Chang said of the crowd, adding that he was concerned for the officers dealing with Floyd.

On cross-examination, Chang said he saw Chauvin and former officer Tou Thou arrive at the scene and assist Lane and Kueng with Floyd.

He said he couldn’t see what was going on with Floyd, but that he never heard the officers call for backup.

“If they had radioed for help, you would have heard that, right?” prosecutor Matthew Frank asked.

US facing ‘complex and volatile’ threats from domestic extremism: DHS
Mom gets outpouring of love from Twitter after revealing she has to tell her son she is dying
More than 250 correctional officers died from COVID-19
Man arrested in wife’s murder now accused of voting for Trump in her name
Ronnie Ortiz-Magro stepping away from ‘Jersey Shore’ to focus on “mental health issues”
Almost two decades after being convicted of pregnant wife’s murder, Scott Peterson seeks new trial