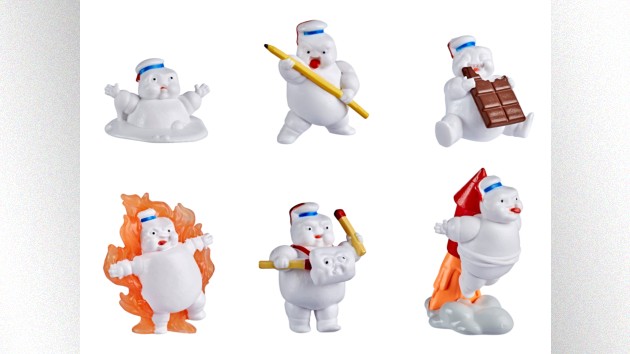 Just days after the spooky little sweets made their debut opposite Paul Rudd in a teaser for Ghostbusters: Afterlife, Hasbro has revealed its GHOSTBUSTERS Mini-Pufts Surprise line of toys.

Each 1.5″ figure will come packaged in a Play-Doh-like cup filled with a fake marshmallow goop that you’ll have to dig through to reveal which of the mischievous marshmallow men you got.

And to further drive collectors crazy, there are six unique ghosts in the first wave of release, with multiple releases planned.  And because you won’t know which you get until you open them, chances are you’ll be swapping doubles of, say, the melting Mini-Puft figure for the one using matches to kebab his marshmallow buddy’s head.

The toys will be released to most major retailers timed for the release of Ghostbusters: Afterlife, which hits theaters November 10.

Biden meets with ‘Dreamers’ in the White House to push pathway to citizenship
The “‘Bridgerton’-verse” is expanding: New spin-off to center on the origins of Queen Charlotte
Watch Jodie Turner-Smith in first trailer for ‘Anne Boleyn; Psych 3 in the works at Peacock; and more
Nathan Fillion talks Sunday night’s finale of ‘The Rookie’, and making a cop show during these times
Judge Judy reveals how she successfully negotiated her $47 million salary
Which states are still requiring masks after the CDC’s updated guidance?