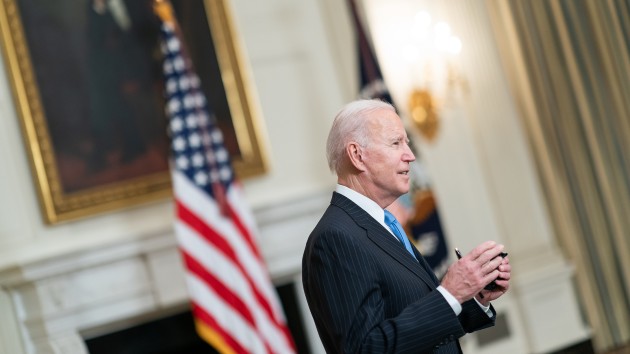 (WASHINGTON) — President Joe Biden unveiled his sweeping infrastructure proposal to expected opposition from Republicans. But before he can worry about finding sympathetic GOP lawmakers, he’ll have to contend with members of his own party who are skeptical of the $2 trillion proposal.

The plan introduced in Pittsburgh Wednesday is expected to be the first of two large packages aimed at rebuilding the nation’s infrastructure and creating jobs.

But the path forward on Capitol Hill for such a massive spending bill is precarious.

If Democrats want to move swiftly, they’ll likely need to do so using reconciliation, a procedural budget tool that allows passage of legislation without the necessary 60 votes to overcome a Senate filibuster. But Biden needs to hang onto moderate Democrats because a single Democratic defection in the evenly split Senate could sink the bill’s chances.

Sen. Joe Manchin, D-W.Va., pushed to include more moderate proposals in the $1.9 trillion COVID-19 relief bill and may seek similar concessions on infrastructure.

“Infrastructure, my God, when you think about it, that pothole doesn’t have an R or D name on it, it’ll blow your tire and ruin your car, it doesn’t care,” Manchin said during a panel last week. “So, don’t you think infrastructure is something that could bring us together?”

Manchin also cautioned his colleagues against adding unrelated items to the bill because he said he believes an infrastructure package could get a large, bipartisan backing “unless you throw everything on top of it, all of your pent-up social frustration.”

And therein lies the challenge in the House, where Biden can only afford to lose three Democrats given the tight margins and some progressive members are calling on the administration to go bigger and bolder.

“This is not nearly enough. The important context here is that it’s $2.25T spread out over 10 years,” Ocasio-Cortez tweeted after details of the plan were released. “For context, the COVID package was $1.9T for this year *alone,* with some provisions lasting 2 years. Needs to be way bigger.”

The Congressional Progressive Caucus called the plan a “welcome first step,” but one that “can and should be substantially larger in size and scope.”

“We have a limited window to get this done — we must seize our chance to build back better with economy-wide investments that work for working families and communities of color,” Rep. Pramila Jayapal, chair of the caucus, said in a statement Tuesday.

Senate Minority Leader Mitch McConnell pushed back on that notion.

“I don’t think they have a mandate to do what they’re doing,” he said at a press event in Kentucky on Thursday. “If you look at the results in Congress, the 50-50 Senate and maybe a three-vote majority in the House, I don’t think the American people gave them a mandate to drive our country all the way to the political left.”

While Biden has been clear that he’ll seek bipartisan support, during a conversation with Politico on Thursday, White House chief of staff Ron Klain said it is not necessarily a requirement.

“In the end, let me be clear: The president was elected to do a job. And part of that job is to get this country ready to win the future. That’s what he’s going to do,” Klain said. “We know what has bipartisan support in the country. And so we’re gonna try our best to get bipartisan support here in Washington.”

Klain said the president’s proposal is meant as a starting point for further conversation.

Several rank-and-file Senate Democrats are largely in favor of the Biden proposal and multiple members touted the bill’s historic nature and praised it for being a job creator in statements released Wednesday.

But even those championing the bill are also hoping to see changes to it.

Biden has proposed funding the massive plan by implementing tax reforms. The most notable would raise taxes on large corporations to pay for the bill, walking back some of the corporate tax cuts pushed through by the Trump administration. Biden has promised that no one earning under $400,000 would see a tax raise to pay for the infrastructure proposal.

Majority Leader Chuck Schumer and other Democrats are hoping that the infrastructure bill might be a vehicle to overturn another Trump-era tax rule. Schumer, who is largely supportive of the overall Biden proposal, said he plans to “fight hard” to get caps on state and local tax deductions, also known as SALT deductions, lifted as part of the bill.

Under President Donald Trump’s tax reform in 2017, a $10,000 limit was imposed on the amount of state and local tax that could be deducted from federal tax dues. The cap most severely impacts residents of states with higher state income taxes, such as the traditionally liberal states like New York and California.

House Democrats are also rallying for changes to the SALT rules.

“I am not going to support any change in the tax code unless there is a restoration of the SALT deduction,” Rep. Tom Suozzi, D-N.Y., said in a statement Monday.

It’s unclear if any Democrats will actually vote against the package on the floor, but if the administration is looking to shore up its chances and avoid being derailed by Democratic defectors, it may be hard pressed to find sympathetic Republicans. Infrastructure has traditionally been a space for bipartisan cooperation, but Republicans said this package is too broadly focused.

Biden personally called McConnell on Tuesday to brief him on the sweeping package, but the Republican described the infrastructure bill as a Trojan horse that is hiding “more borrowed money and massive tax increases on all the productive parts of our economy.”

“I think that package that they are putting together now — as much as we would like to address infrastructure — is not going to get support from our side,” McConnell said Thursday. “The last thing the economy needs right now is a big whopping tax increase.”

He also slammed the administration for trying to go it alone.

Democrats rammed through the COVID-19 spending bill on strict party lines, without a single Republican backer. While many moderate Republicans have yet to weigh in, it’s possible this infrastructure package will also have to ride entirely on the backs of Democrats.

Sen. Shelley Moore Capito, the top Republican on the Senate Environment and Public Works committee, said the Biden proposal was a far cry from a serious infrastructure proposal.

“President Biden’s so-called ‘jobs’ proposal is a clear attempt to transform the economy by advancing progressive priorities in an unprecedented way,” Moore Capito said in a statement.

Still, Biden said Wednesday that he was hopeful Republicans would ultimately support the proposal and that he was open to ideas about “how to pay for this plan.” He said he would invite Republicans to the Oval Office and listen to them.

“These are my ideas on how to pay for this plan,” he said. “If others have additional ideas, let them come forward. I’m open to other ideas, so long as they do not impose any tax increase on people making less than $400,000.”