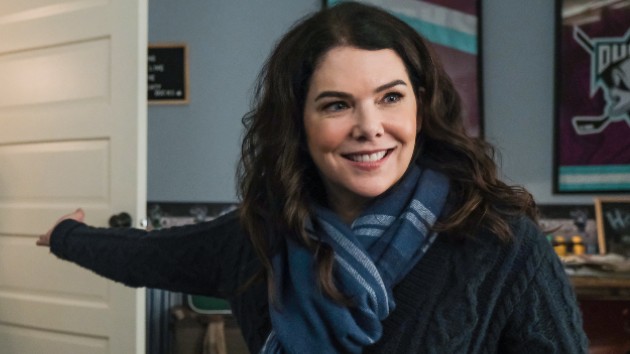 Shepard and his wife Kristen Bell are apparently renovating their home, Graham vented on Jimmy Kimmel Live!, and in the meantime, gearhead Shepard “basically took…the front lawn, and turned it into a massive driveway for all of his cars.”

What’s more, the family is apparently camping out in, “the most massive band tour bus you’ve ever seen.”

“He’s out of his mind,” Graham vented, laughing. “Andy they’re never getting rid of it, Jimmy. He bought that.”

She also adds, “he rides around like topless on his motorcycle. You have to just love him. Like a brother.”  Graham played Shepard’s sister in the TV series Parenthood:

You can’t change your family — even your TV family.

Speaking of which, Graham’s dating Peter Krause, her other TV brother from Parenthood. He “lives in my bedroom,” she admits with a laugh. “It’s confusing for some people.”

‘Not a moment too soon’: Native American community welcomes Cleveland baseball team name change
Clara McGregor shows off fresh face, a month after dog bit her
‘Modern Family”s Ariel Winter hopes for “freedom” for Britney, “consequences” for people “who have kept her away”
Mark Wahlberg talks how being a father spurred him to star in and produce the drama ‘Joe Bell’
’13 Reasons Why’ star Tommy Dorfman owns her truth: “I have been privately identifying and living as a woman”
Some people making $100K or more say the benchmark for financial success has shifted