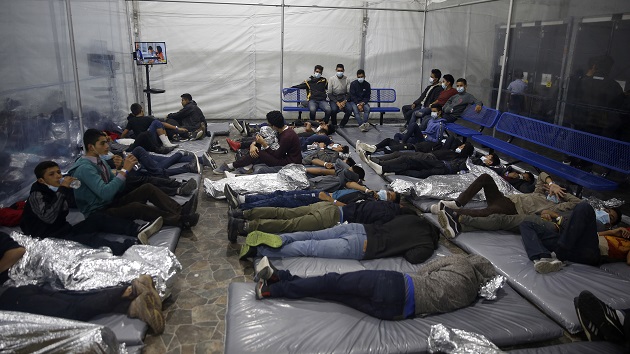 (DONNA, Texas) — The Biden administration for the first time on Tuesday allowed news media inside a Customs and Border Protection facility facing unprecedented overcrowding due to the recent surge of migrant children and families.

A growing backlog inflamed by the coronavirus pandemic has caused delays for the Department of Health and Human Services Office of Refugee Resettlement, the agency responsible for housing children after they are apprehended by Border Patrol.

Representatives from the press were allowed inside a temporary tent facility in Donna, Texas, which was meant to hold 250 migrants but had a population of more than 4,100 as of Tuesday. Of those, 3,400 were unaccompanied minors and more than 2,000 have waited beyond the legal limit of 72 hours, according to Customs and Border Protection.

The video shows children and families packed into tight living quarters, sleeping on gray camping mats with mylar blankets for warmth. In transparent, plastic pods there is hardly room to walk with young children crammed shoulder to shoulder.

Journalists also saw a fenced in recreation area where two groups of boys were playing soccer, agents in dark sunglasses watching over them.

“As I have said repeatedly, a Border Patrol facility is no place for a child,” Homeland Security Secretary Alejandro Mayorkas said in a statement Tuesday. “We have been working around the clock, in coordination with HHS, to quickly move unaccompanied children out of these crowded Border Patrol stations and into the care of HHS so they can be placed with family members or other sponsors.”

All unaccompanied children who are apprehended in the Rio Grande Valley are brought to the Donna facility where they receive a health screening and wait to be transferred to the Office of Refugee Resettlement.

“Yes we are officers. Yes we enforce the immigration laws,” Escamilla said. “But when you have kids involved, we have to take care of these kids. This is not the right place for these kids.”

Escamilla said children are offered the opportunity to call family members at least once every 48 hours while they are in the facility.

The new administration took swift actions right from the start to reverse several immigration policies of the Trump era. While the new White House has come under fire for pulling back hard-line restrictions before it was fully prepared to handle the current surge of migrants, some remain in place.

Biden administration officials are quick to point out one major departure from Trump’s pandemic-era immigration restrictions: the treatment of unaccompanied migrant children.

When the Trump administration invoked a section of the public health code known as “Title 42” it gave immigration authorities the green light to start rapidly removing unaccompanied migrant children. Mostly in their teens, kids at the time were sent back to Mexico sometimes within a matter of hours. Customs and Border Protection at the time said it was necessary to reduce overcrowding at its facilities.

Legal advocates for immigrants have decried the use of Title 42 as illegal and unnecessarily cruel. Meanwhile, the Biden administration has taken on the responsibility of processing and caring for children who arrive at the border without a parent or guardian.

The change, combined with an unprecedented increase in the number of kids found crossing the border, has strained government resources and sent the Biden administration scrambling to find more shelter space. Federal officials have enlisted convention centers in California and Texas, and even co-opted a NASA site for the mass housing effort.

The difference in the application of the Title 42 so-called health mandates is also seen with migrant families who cross the border. Thousands have been turned back or “expelled” under the Biden administration, but the majority in recent weeks have remained in the U.S. for traditional immigration processing.

Last February, nearly 20,000 migrant families were stopped at the border by U.S. immigration authorities. Of those, nearly 8,000 were rapidly “expelled” under Title 42. U.S. officials have said immigration officials on the other side of the border, in the Mexican state of Tamaulipas, have refused to accept families with children under the age of 7.