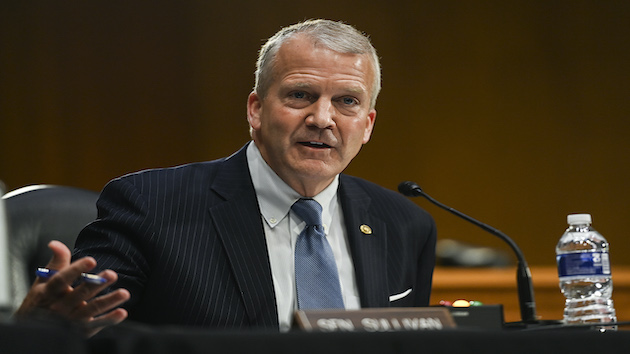 “I think it’s really important to have this discussion on voting rights, on voting integrity, on access to the ballot,” Sullivan told “This Week” co-anchor Jonathan Karl.

But Sullivan said a bipartisan conversation surrounding voting rights is difficult right now because when someone in Congress has opposed H.R. 1, the Democrats’ bill on the issue, it turns into “an accusation that somehow we’re supporting Jim Crow-like policies.”

Pushing the For the People Act — which seeks to abolish hurdles to voting, reform the role of money in politics and tighten federal ethics rules — congressional Democrats are trying to counter attempts in Republican-led state legislatures to restrict voting rights in the name of security after many in the GOP, led by former President Donald Trump, pushed false election theories following the 2020 election.

Karl pressed Sullivan on the efforts in 43 states to restrict access to the ballot.

“Why is it that Republicans seem to believe, at this moment in time, that they want fewer people to vote — that the right thing to do is to have fewer people voting in our elections?” he asked.

Sullivan dodged Karl’s question, but said that it is unusual for federal voting reform to become an issue of contention, given that the administration of elections is historically left to the states.

“When you look at the history in our country, individual voting issues in states is not normally the reason — the impetus — to bring major bipartisan national federal legislation, unless there is strong bipartisan support for this,” he said. “And so I think that’s the key issue in right now, H.R.1, the Pelosi bill from the House, not only doesn’t have support from Republicans, it doesn’t have support from many Democrats. So again the key issue here is to work on this issue in a bipartisan nature.”

Sullivan said immigration reform is another issue which warrants bipartisan negotiation and responded to comments made about the crisis at the southern border by White House Communications Director Kate Bedingfield, who said in an earlier interview on “This Week” that Biden has made clear the borders are closed for the time being.

Following a recent trip to the southern border with much of the Senate GOP conference, he said President Joe Biden and Vice President Kamala Harris need to go and “see what we saw, to hear what we heard from officials who are on the front lines.”

“But right now it is open borders,” Sullivan said. “It’s a humanitarian, and public health crisis that we need to address.”

Karl also asked the senator about the fallout from the violence at the Capitol on Jan. 6, as federal authorities continue to prosecute those who took part in that violence by storming the building. Trump recently said that he felt those in attendance were being “persecuted.”

“Is this DOJ effort to charge the people that went into the Capitol, is that — is that persecution or is that rightful prosecution?” he asked.

Sullivan disagreed with the characterization from the former president, but said that he believes it is important that those who were in attendance and were peaceful not have their reputations “tarnished.”

“Here’s the key issue, and it’s a really important distinction: The people who committed violence — and I condemned that violence from the minute it started happening — should be fully prosecuted,” Sullivan said. “I think the vast majority of Americans, Democrats and Republicans, fully agree with that, no doubt about it.”

The violence that day ultimately led to the House of Representatives pursuing a charge of incitement of insurrection against Trump, which led to the most bipartisan impeachment vote in history. The measure failed in the Senate, but Sullivan’s home state colleague, moderate Sen. Lisa Murkowski, vote to charge the president.

Her vote led to a censure at home by the Alaska GOP and a vow from Trump and the state party that they would attempt to unseat her when she up for reelection next year.

Sullivan said he will support her when she is on the ballot again.

“Sen. Murkowski was a strong supporter of mine and we won that reelection, very strongly,” Sullivan said of his campaign last year.

“Look we don’t agree on everything, but we make a good team for Alaska,” he added. “If Sen. Murkowski runs again, I’m going to support her.”