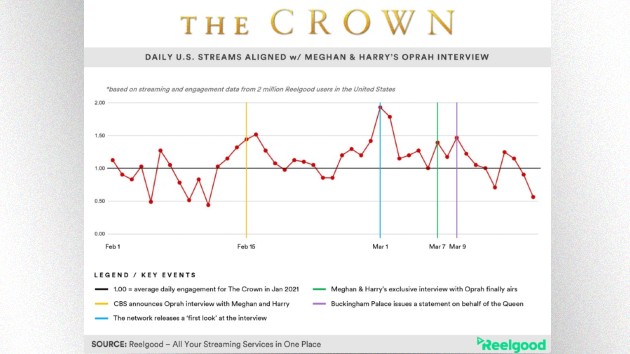 (LOS ANGELES) — Oprah Winfrey’s recent chat with Prince Harry and Meghan Markle did more than spark a response from the Queen. It also shook up The Crown — the Netflix show, that is.

Analysis of viewing data from streaming service aggregator Reelgood showed that the Emmy-winning series saw its daily streaming spike to double its usual daily audience following the much hyped, and much seen, interview with the runaway royals.

What’s more, the company also noted viewing spikes after key “real life” crown moments, such as the Queen issuing a statement regarding alleged racism, which was spurred by the chat.

After the Oprah interview — which followed The Crown’s four wins at the Golden Globes, perhaps adding to interest — the show rose to the #9-ranked Netflix show among the two million viewers and 300 streaming service choices on the Reelgood platform.