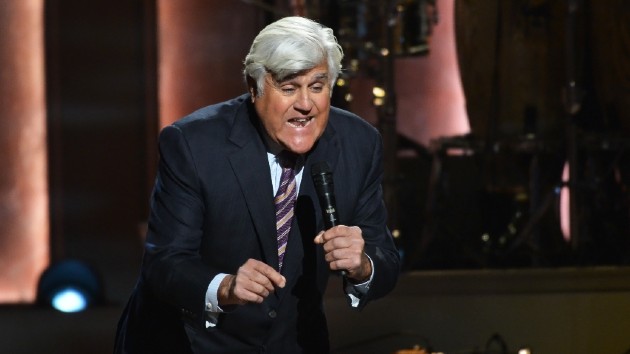 (LOS ANGELES) — (NOTE LANGUAGE) Tenured late night host Jay Leno is enjoying cars more than comedy these days, but that doesn’t stop him from revealing the secret of his success.

Appearing Wednesday on the Ask Iliza Anything podcast, Leno, 70, explained why his comedy never revolves around “the obvious joke.”

“It’s the same rule I used when I was working clubs and I would talk to the audience. If there’s a big fat guy in the audience and he’s heckling me; I make fun of his tie, or something else,” explained the former Tonight Show host. “I’m not there to kill a guy, I’m just there to have fun with the guy.”

Leno reflected on a time where he did allow his comedy to go too far, which happened after a “road rage incident” where a man gave him the finger as the two were sitting in traffic.

The Jay Leno’s Garage star admits he did go for the obvious, mocking the man’s appearance and lack of a love live, which caused the driver to start sobbing.

Leno said he “felt so bad” for what he did, adding his words “literally stabbed the guy in the heart,” so he made things right.

After making the man pull over, Leno learned from their chat that the man had a daughter who loved Taylor Swift, so the comedian extended an olive branch by inviting the man and his family to the late night show to meet Swift back stage.

Leno said that turned everything around and reflected, “It’s easier to be nice. It’s too much trouble to be a [jerk.]”

The Emmy winner also expressed that comedians rarely fail because of a lack of talent, saying they sink their own ship when they treat others poorly or let bad habits or bitterness rule their life.

‘Barbershop,’ ‘Rick & Morty’ star Keith David, ‘The Craft”s Rachel True ring up thriller ‘The Last Call’
Matt Damon denies using gay slur, saying, “I stand with the LGBTQ+ community”
Sandra Oh says she’s enjoying transitioning into “the mother stage of my career”
The Property Brothers reveal what inspired them to evolve and improve their brand over the years
Chris Evans responds to Lizzo’s joke that she’s pregnant with his baby
Ninety-one-year-old Gene Hackman trending on Twitter for all the right reasons