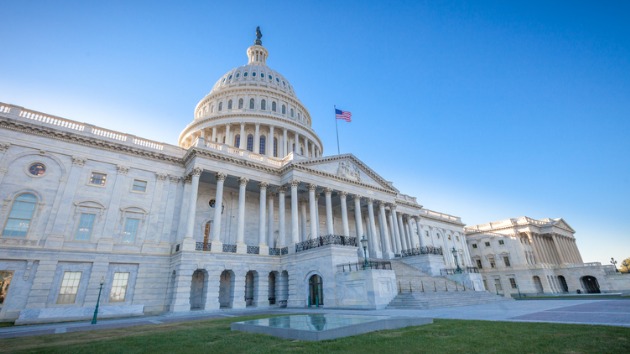 (WASHINGTON) — Landmark legislation that would expand federal civil rights law to prohibit LGBTQ and gender identity discrimination in public accommodations received its first hearing in the Senate Wednesday more than five years since its inception and after recent passage in the House.

Supporters of the bill — called the Equality Act — have never been more buoyed by their chances of success with Democrats controlling all of the levers of federal power, but the Judiciary Committee proceeding Wednesday revealed stark battle lines between Democrats and conservatives.

Both sides largely talked past each another, signaling an uphill struggle for the bill to get the necessary 10 Republicans, if the Democratic majority remains united, to pass it in the Senate.

Judiciary Committee Chairman Dick Durbin, D-Ill., at the outset of the hearing, noted the historic advances for LGBTQ Americans, including the recent Supreme Court rulings establishing marriage equality and protection from employment discrimination, but he added they “still face a patchwork of legal protections across America. Some states, like Illinois, comprehensively protect [LGBTQ] individuals from discrimination. Others lag far behind.”

Twenty-one states have laws that protect against both sexual orientation and gender identity discrimination, but the Human Rights Campaign (HRC), the largest LGBTQ advocacy group in the nation, cited 82 bills filed already in the 2021 state legislative session, a historic high, that it said would negatively impact transgender Americans.

Critics of the Equality Act on Wednesday painted a bleak picture if the bill were to become law, claiming it would strip away legal protections for religious institutions and faith-based organizations and potentially destroy women’s and girls’ sports, a claim the bill’s supporters vehemently denied.

“The language is rather significantly broad and would almost inevitably put this law in a position of occupying a more significant place with respect to religious institutions,” said Sen. Mike Lee, R-Utah.

One opponent insisted that the measure would redefine what religious and faith-based institutions can do if they serve the public, saying that legal protections under the 1993 Religious Freedom Restoration Act (RFRA) — which says that government may not overly-burden a person’s exercise of religion — would be stripped away, potentially leading to a flood of lawsuits.

But Sen. Tammy Baldwin, D-Wis., the first openly-LGBTQ senator, disagreed, pointing to states have have passed laws that do what the Equality Act is seeking to do.

“These changes are not about taking something away from others but about ensuring we all have access to the same rights of all Americans,” adding that every time advances have been made for this group of citizens, opponents predict disaster that never comes to fruition.

“Every time we do so, there are those who have predicted calamity but that has never come to pass,” Baldwin said.

“We know that laws have been on the books since 1970, and the sky didn’t fall. We know that civil rights laws have protected LGBTQ people — comprehensive laws in Illinois, Minnesota, Virginia, New Mexico — and the claims that are being asserted now are not realized in those states,” said Alphonso David, HRC’s president.

Republicans focused a significant amount of time Wednesday asking questions about what the legislation might do to girls’ sports, from unusual questions like those from Sen. John Kennedy, R-La., about whether or not it would permit “a boy who identifies as a girl” to shower or dress with girls, to whether young women might lose sports scholarships to overly-developed boys who have transitioned.

One controversial witness invited by Republicans, journalist Abigail Shrier, warned in stark terms, “It applies a wrecking ball to female sports by insisting that any male who … claims to be female for any amount of time in his senior year, perhaps when he’s eyeing college scholarships, has a full legal entitlement to walk onto the first team and take on of those.”

Shrier predicted dire circumstances where men could also claim to be female and be placed in a women’s prison or gain access to a battered women’s shelter.

“The Equality Act does not force anyone to do anything other than not to discriminate. The legislation doesn’t create some new realities. It simply allows transgender students to not be discriminated against in sports … The NCAA and even international Olympic Committees already allow transgender athletes to participate and have for years,” David argued.

Sen. Lindsey Graham, R-S.C., who said he was interested in trying to work out a compromise, threw out a hypothetical, trying to get at when religious institutions might lose protections under the legislation.

With all of the heated rhetoric, one witness, Edith Guffey, a conference minister at the United Church of Christ in Kansas, offered an historical warning that religion was once used as a weapon against enslaved Black Americans.

“We should all be able to agree on this one thing — the law should treat all our children, God’s children, equally,” said Guffey, whose 14-year old came out first as gay and then as a trans-non-binary person. “I also know how religion and faith were used to justify slavery, but that was wrong … I think we can learn from that.”

Repeatedly, senators and witnesses brought their own personal experiences to the discussion to buttress their own positions on either side of the issue.

Sen. Chuck Grassley, top Republican on the panel and father and grandfather of women who participated in sports, argued, “We need to consider the perspective of everyone who might be affected,” saying that Congress needs to hear from physicians, occupants of homeless and domestic violence facilities, correctional institutions before contemplating changes to current law.

“I am deeply concerned about this act’s negative implications for all girls,” said Grassley.

Rep. Marie Newman, D-Ill., recounted the excruciating journey of her 13-year old who was near suicide and ended up she said, through therapy, discovering her true identity.

“She told us she had figured it out. She told us, ‘I’m not a boy. I’m a girl, and my name is Evie Newman.’ Everything had clicked,” said Newman, pleading with lawmakers to protect her daughter.

“(The Equality Act) will ensure that Americans like my daughter are afforded the same civil rights already extended to every other American across the nation. And that’s all it’s about. It’s about equality. We’re not asking for anything special or different. I encourage all of you to not weaponize religion and not weaponize red herrings about sports.”

One witness, 16-year old Stella Keating, a high school sophomore and transgender activist pushing for passage of the Equality Act asked lawmakers, “What happens if I want to attend a college in a state that doesn’t protect me? Right now, I could be denied medical care or be evicted for simply being transgender in many states. How’s that even right? How’s that even American?”

It is unclear if supporters, including the vast majority of Democrats, can garner the 60 votes needed to send the bill to the president’s desk.

Biden made passage of the Equality Act part of his 100-day agenda and reiterated in a statement last month, “I urge Congress to swiftly pass this historic legislation. Every person should be treated with dignity and respect, and this bill represents a critical step toward ensuring that America lives up to our foundational values of equality and freedom for all.”

At the Wednesday hearing, few Republicans on the deeply-divided panel seemed open to negotiating a compromise on the bill, something supporters have said they know must happen. But Sen. Thom Tillis, R-N.C., did reach out to his Democratic counterparts.

“I want to find a compromise, one that prevents discrimination against anybody in the LGBTQ community, any American, but I also want to protect Americans,” said Tillis. “I hope that we can work together and make progress, because there’s a real challenge here. But I feel like even in this hearing, although the questions were insightful, sometimes we’re talking past one another.”

The Human Rights Campaign, prominent civil rights groups, and other organizations fighting to build support for the legislation plan to focus on GOP senators, including Utah’s Mitt Romney, Rob Portman of Ohio whose gay son led to him renouncing his opposition to gay marriage years ago, and Susan Collins of Maine who co-sponsored the bill in the last session but pulled back when changes were not made to address her privacy concerns and other issues.

Chairman Durbin said he would work to find common ground but that the time had come to put some limitations, however delicate the issue, on religious practices.

“I do believe that people who want to blatantly discriminate and use religion as their weapon have gone too far. We have to have limits on what they can do, Durbin said. “I might remind us in history that the Ku Klux Klan was not burning question marks, they were burning a cross. They were making some distorted connection with a religion, and God forbid that anybody would buy that.”

“The soul of The Valley is on the line”: With teaser, Netflix announces ‘Cobra Kai’ Season 4 to debut in December
More businesses are mandating COVID-19 vaccines. Is that legal?
26-year-old sheriff’s deputy killed in ambush shooting: Louisville police
Unvaccinated patient in hospital pleads for others to get vaccine: ‘I want to help as many people as I can’
Report: Mike Richards in talks to host ‘Jeopardy!’
Leaders across the country in disagreement over whether to require COVID-19 vaccine passports