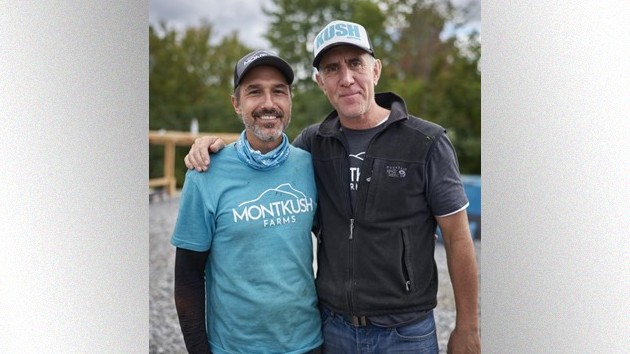 (NEW YORK) — Anthony Sullivan — you may know him as the OxiClean pitchman — and Ethan Zohn, the winner of Survivor: Africa and a two-time cancer survivor, have teamed up for a new reality show called Kings of Kush.

Produced by Deadliest Catch’s Thom Beers, the Vice TV series chronicles the pair’s development of a 50-acre Vermont hemp farm, MONTKUSH, to create CBD products, the cannabinoid compound that touched both of their lives.

For Sullivan, his 10-year-old daughter, Dylan, who suffers from a rare genetic disorder, was his inspiration. He tells ABC Audio he sought an alternative for an anti-seizure medication she was prescribed.

“The side effects were terrible,” Sullivan said “She lost 20 percent of her body weight. Her classmates had to put a bed in her classroom. But most of all…her whole personality just vanished.”

When his wife suggested CBD, Sullivan said, “I didn’t know anything about it….[M]y reaction was, ‘I don’t really want my seven year old to be stoned.’ That’s how ignorant I was of the whole thing.”

Instead, he undertook a massive research effort and contacted his old pal Zohn, who had CBD experience.

“I leaned on cannabis to help mitigate the side effects of cancer treatments — radiation, stem cell transplants, chemo, all that stuff,” Zohn confessed.  “And then once I was in remission…I got hung up on a lot of anxiety and stress and fear of relapse until someone introduced me to CBD.”

“It was like I could finally take a deep breath,” Zohn declared.

Their venture begs the question: Can OxiClean get out hemp oil stains?

“It does!” Sully laughs.