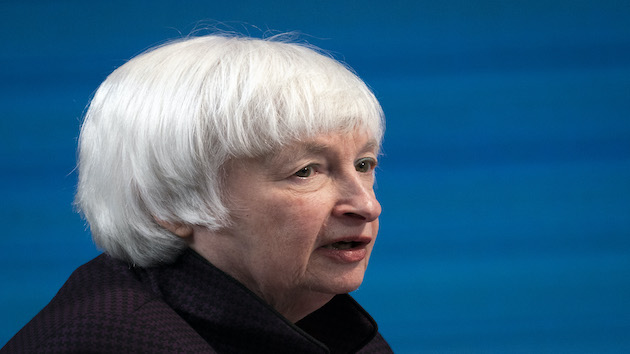 “It’s the right size to address the very significant problem that we have,” she told ABC News Chief Anchor George Stephanopoulos. “We need to defeat the pandemic. This package really does that.”

“There’s enough support in this package to relieve suffering and to get the economy quickly back on track. I’m hopeful that, if we defeat the pandemic, that we can have the economy back near full employment next year. And I think this is the package we need to do that,” Yellen added.

Biden signed the relief package into law Thursday. The act passed without Republican support in both the House and Senate.

It includes provisions that direct relief payments and federal unemployment aid to Americans, gives schools more money to help with reopening and aims to help speed up coronavirus testing and vaccination efforts. Additionally, the bill includes resources for small businesses, housing and food aid, changes to the tax code and the most aggressive expansion of the Affordable Care Act since the health care law’s passage.

While the Pew Research Center reported that around 70% of country supports the bill, some critics of the package — including former Democratic Secretary of the Treasury Larry Summers — have argued that its historic price tag could balloon the national debt and lead to higher rates of inflation.

“I don’t think it’s a significant risk. And if it materializes, we will certainly monitor for it. But we have tools to address it,” she added.

In 2017, Yellen testified that long-term budget projections “should keep people awake at night.” With the federal debt expected to exceed the gross domestic product for the first time since World War II, Stephanopoulos pressed the secretary Sunday, asking, “are you getting any sleep?”

“I am getting sleep,” Yellen responded. “My views have changed somewhat about fiscal sustainability, in part, because what we’ve seen all around the world is a trend toward very low interest rates. Interest rates in the United States are much lower than they were in past decades, and you see that in all developed countries around the world, and it reflects structural trends that are not going to disappear soon.”

“In the longer run, we need to get deficits under control to make sure that our fiscal situation is sustainable,” she added.

In order to balance the budget, Stephanopoulos asked Yellen if a wealth tax — similar to what has been proposed by Sen. Elizabeth Warren, D-Mass. — could help raise revenue to pay for the Biden administration’s programs.

“President Biden has put forward a number of proposals. He hasn’t proposed a wealth tax, but he has proposed that corporations and wealthy individuals should pay more in order to meet the needs of the economy, the spending we need to do, and over time I expect that we will be putting forth proposals to get deficits under control,” Yellen said.

When Stephanopoulos pressed if that meant the administration would not implement the tax, Yellen responded, “that’s something that we haven’t decided yet.”

PA follows CDC: fully vaccinated people do not need masks
Pfizer-BioNTech COVID-19 vaccine fully approved for ages 12-15
Yankees Torres tests positive for COVID-19, 8th member of team
Homeland Security secretary defends Biden administration’s handling of conditions at border
Study finds COVID-19 vaccines have no impact on pregnancy: What to know
What DiDi Richards is most excited about ahead of her first WNBA season