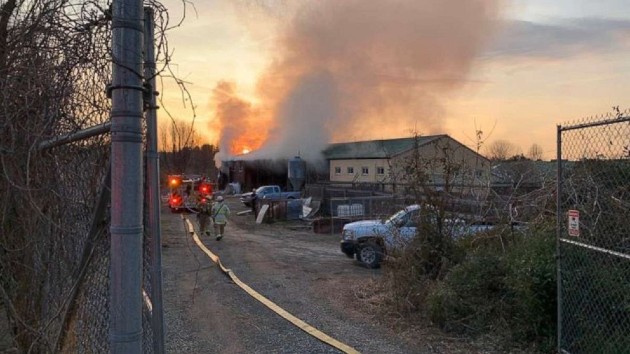 (WASHINGTON) — Two giraffes have died after a fire engulfed their barn at a zoo in suburban Washington, D.C.

The incident occurred on Monday, March 8, at Roer’s Zoofari in Vienna, Virginia, just 12 miles west of the nation’s capital, when the Fairfax County Fire and Rescue Department received a call in the late afternoon alerting them to a barn fire at the animal park.

When authorities arrived they reported a fire from a roof at Roer’s Zoofari and on two floors of a two-story barn and, according to the zoo, called the owner to inform her of the incident.

“Zoofari owner, Vanessa Roer, received the call at 5:30 PM from Fairfax County dispatch that the barn where the giraffes was housed in caught fire,” Roer’s Zoofari said in a statement on social media. “Staff and the zoo’s veterinarian arrived within minutes to help rescue and care for approximately 20 other animals housed in the same area. We are grateful that no staff members or other Zoofari animals were injured or lost.”

The Fairfax County Fire and Rescue Department confirmed that two of the zoo’s giraffes were confirmed dead once they were able to get the fire under control. Roer’s Zoofari also confirmed the tragic loss in a statement on their website.

“Staff at Roer’s Zoofari are mourning the loss of a beloved giraffe, Waffles, and his companion giraffe, after a devastating barn fire that occurred after the zoo closed for the day,” the statement read.

“Waffles was a favorite with our visitors and our team. We are heartbroken,” said Roer. “We are so grateful that no person or other Zoofari animals were injured or lost. And we deeply appreciate the firefighters who came so quickly to help extinguish the fire.”

Investigations as to how the fire began are currently ongoing and the zoo will remain closed until Friday, March 12, according to their website.

Grief counselors are being made available to staff “who are devastated by this tragedy and who cared deeply for these members of the Zoofari family,” according to Roer’s Zoofari.

No firefighters or zoo employees were injured in the blaze.

Said Vanessa Roer: “Our team is so dedicated to the wellbeing of every animal, so when any are lost, it’s a very emotional time. We will be supporting each other through the healing.”

Jamaica sweeps women’s 100m at Tokyo Olympics as Elaine Thompson-Herah sets record
Top female athletes speak out amid Olympics, defy convention through their uniforms
American Caeleb Dressel sets world record in 2nd individual win at Olympics
These dating US track athletes are taking their love to the Tokyo Olympics
How Allyson Felix could make history at the Tokyo Olympics
Buggles, Benatar and bloopers: Looking back at MTV’s launch 40 years ago