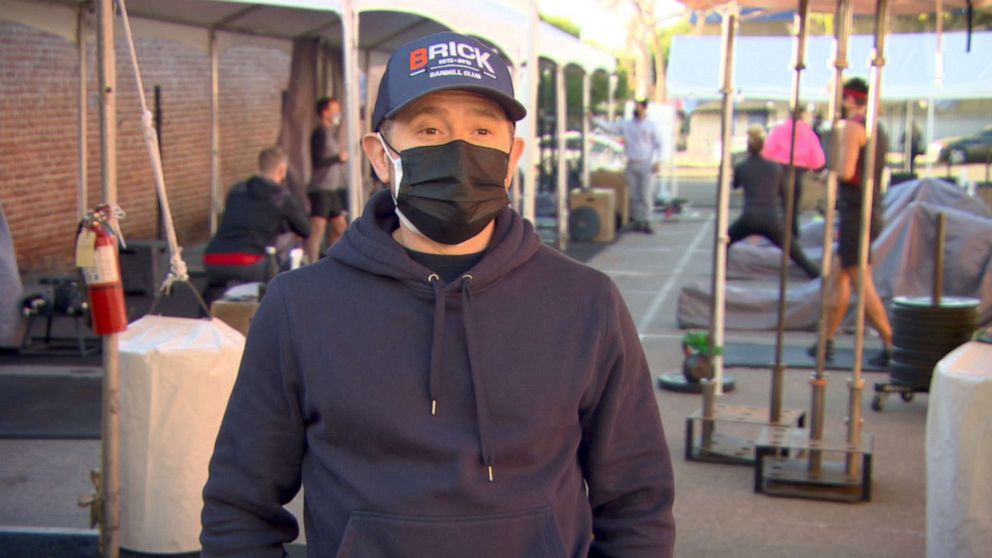 (LOS ANGELES) — As Los Angeles edges out of the most restrictive tier in its covid-19 reopening plan, small business owners who’ve struggled to stay afloat say that whatever hope it brings is mixed with feelings of frustration and anger.

For many of the small business owners, the past year has been defined by sacrifice and heartbreak, and the constant concern that their business could go under as they try to keep up with the latest requirements.

Jared “JP” Perelmutter, the owner and operator of Brick Fitness, hasn’t been able to open his gym for indoor workouts for the last year. Since last summer, the parking lot outside the gym and a loyal clientele have made it possible to hold outdoor in-person workouts — even if that means wearing masks, social distancing and keeping the noise levels low.

“So, this is the equivalent of a silent disco,” Perelmutter said during a recent visit from “Nightline.” “You can see some of them have their EarPods in so that they can listen to their own music, and then they just have to focus and listen intently because the coach can’t scream.”

“They’re just happy to be outside of their house and moving their bodies,” he added.

Under the state’s purple tier, L.A. restaurants and gyms have been allowed to operate solely outdoors and with modifications, while other businesses, like theaters and music venues, have remained closed.

Perelmutter says that for the limited programs he’s been able to offer at the 11-year-old gym, they’ve still only added up to 50% his normal volume. Moreover, while the cost of doing business has increased, half of the 28 staff members at the gym pre-pandemic had to be let go.

“On a monthly basis, our increased expenses to operate safely outdoors is between $10,000 and $12,000 a month,” he said. “Increased cleaning crew, increased cleaning materials, the tent rentals … our maintenance is five times what it was on equipment alone; [it’s] getting worn and broken being outside, and being weathered.”

And while he’s still prohibited from using the space for normal business, Perelmutter is still expected to pay the full rent for his 10,000-square-foot gym — a staggering $30,000 per month. He called it his “really expensive warehouse and storage facility.”

“It’s just completely empty. For just general upkeep, even a building, if they stay abandoned too long, they basically fall apart,” he said. “We still have to maintain it. Cleaning crew still comes in every night and does some basic touch-up work — make sure the place is clean. We change out all the HVAC HEPA filters because we do have staff and members that come in … to utilize the bathroom.”

Perelmutter said he “understands the severity” of the pandemic and that he has immunocompromised family members himself. But the handling of COVID-19 precautions, he says, has been frustrating.

“There’s a lot of negative energy because we all just feel like we’ve been kinda left out on the island to survive on our own,” he said.

“It still is hard for me to go through the tablet and try to program it and stuff. I have to call my daughters or I need to get assistance,” Sanchez told “Nightline.” “But yeah, I had to jump into the technology, otherwise I would be totally dead if I’m not on the website or using the media.”

With only a few tables set up for outdoor eating, however, Sanchez says his revenue stream has taken a “painful” hit. Delivery apps can charge commission fees as high as 30% per order, putting less money in the pockets of restaurant owners who were already operating under tight profit margins before the pandemic.

“What you take home is less,” Sanchez said. “That’s how it is now.”

Sanchez said he’s been “blessed” to have a “great” landlord who has kept his rent low since before the pandemic began.

“It makes a huge difference because the people that are in business — a small business like mine — when they raise the rent crazy, we’re not able to cover it,” Sanchez said. “It’s sad that so many people have such high rent, and then the bars are closed. The patios were closed for so long.”

Restaurants in the city of 10.4 million people only returned to outdoor dining a few weeks ago, after seeing a spike in cases that made January the state’s deadliest month of the pandemic so far. By September 2020, more than 15,000 businesses in L.A. had shut their doors — more than any other city in the U.S. — with half of the closures expected to be permanent, according to a Yelp analysis.

Yet, even with that reality casting a shadow over Sanchez’s head, a harsher reality lingers for the father of two: In Los Angeles, the Latino community has seen three times more death from COVID-19. Sanchez said he’s trying his best to keep his customers and employees safe and avoid exposing them to the virus.

“They’re working hard with the vaccine and trying to control this virus because nobody wants it,” Sanchez said. “I mean, we don’t want it. We just want it away. And I hope they can control that. I mean, I think that will be the answer. If everything goes back to normal, it’s because it’s under control.”

States have loosened their COVID-19 restrictions at different rates, and just this week, Texas and Mississippi announced they would lift their mask mandates and reopen businesses at full capacity. California, however, has fluctuated between shutdowns and partial reopenings, and angry business owners and employees have directed their frustrations toward Gov. Gavin Newsom.

“You wanna shut things down that aren’t deemed essential, but then you can’t cherry pick what’s essential and what’s not,” said Jason London, a bartender at the Pineapple Hill Grill and Saloon in Sherman Oaks for over a year. “It pays my bills. It pays my rent. I can’t call the Chevy dealership like, ‘Hey, I can’t pay my truck note this month. Sorry.’ They don’t care. Like, they feel bad for you, but they still want their $450 for their truck.”

London noted it’s not just those working inside the restaurants who are impacted by the restrictions — it’s everyone who helps to keep the restaurant running, too.

Angela Marsden, the owner of Pineapple Hill, first spoke to ABC News in March 2020 after she’d received news of the mandatory shutdown. At the time, she wasn’t sure if her restaurant would still exist today.

Since then, she’s worked hard to comply with the state’s restrictions, first relying on takeout only, then building a patio for outdoor dining, and finally, doing indoor dining with some modifications before she was forced to close again.

“The summertime was the hardest,” Marsden said. “After they shut us down inside, they basically said, ‘Well, now you can go outside, but you can’t go inside. But here’s what you need to be outside.’ And again, it’s like this 48-hour warning.”

Marsden said she turned to Facebook to buy used furniture off other restaurant owners who could not set up outdoor dining. Pointing to one set of tables that she said were bought from an Italian restaurant owner, she explained, “The stress of everything. He was older, and the fear of COVID. He ended up in the hospital, and his manager is working with me on what to charge me for his used furniture that I’m buying.”

“So it was very heartbreaking,” she said. “But I had to do it because I have to survive.”

Marsden said that when they reopened during a heat wave last summer, her staff were not only wearing masks but they wanted to wear face shields and gloves as well. “I had one person out here almost have a heat stroke,” she said.

She said business started coming back in September and she saw her first profit of the entire year in October. As for the rest of the year, she said, “I have taken a loss every single month — anywhere from $20,000 to $30,000. Overall, I’ve lost over half a million [dollars] in revenue that would normally be coming in.”

Then, in November, the state implemented another full shutdown, prohibiting outdoor dining and gatherings with individuals outside of one’s own household, even if outdoors. Marsden said by this point she had already spent $80,000 on modifying the restaurant and that the Paycheck Protection Program loan funds she’d gotten had already run out.

“I told my staff to meet up with me the following week and I would give them their last paychecks and then bags of food,” Marsden said. “Remember, Thanksgiving is one of the biggest holidays for restaurants. I went out and bought $10,000 worth of food to sell that now can’t be sold.”

That same day, she said a film production crew set up a food truck and tented dining area in the parking lot where she’d built her outdoor dining patio. Film productions had been deemed essential by Newsom.

“I still get upset talking about it. I looked at my girlfriend. I was like, I have to start telling the truth whether people think it’s political [or not]. I don’t know what they’re gonna think … that I don’t believe in COVID? Because I do. But they’re killing us,” she said of the restrictions. “They’re just killing our community and I’ve watched too many businesses die.”

Marsden subsequently posted an emotional video on Facebook where she questioned the difference between the two dining operations and blasted the state for categorizing businesses like hers as nonessential. The video went viral and people from around the world helped her raise over $220,000 in a crowdfunding campaign.

Like Marsden, many people across California have expressed frustration with Newsom. Some have even called for his resignation.

Speaking to ABC News, Newsom said, “We just put $2.5 billion in small business grants. We just did an almost $10 billion stimulus in the state and $3.8 billion in direct grants, $600 grants to households — families that have been disproportionately impacted by this pandemic. An additional $2 billion on top of our $500 million for grants for small businesses.”

“We’re moving through tiers — now purple, red tiers,” he added. “And as we move through tiers as the case rates decline … as that stabilizes, you’re going to see businesses over the next weeks, not just months … begin to reopen with modifications at a much larger scale than they currently are.”

With their restrictions loosening, Perelmutter and Marsden are now concerned about how they’re going to settle all the debt they’ve accumulated this past year.

“We’re coming on 12 months. I have been forced to shut down my business as it was operating successfully for a decade, while still under the assumption that I’m supposed to maintain all of the normal expenses,” Perelmutter said. “How does that work in any storyline?”

Marsden said that even with the crowdfunding donations, she’s still close to $300,000 in debt after taking out both a PPP loan and a separate loan from the Small Business Association.

“I took that money and I paid my staff. I paid for the patio. I paid for all the COVID stuff,” she said.

Nevertheless, as they continue to face uncertainty moving forward, all of the business owners said they don’t plan on giving up.

“I actually am really loving the outside, but I really want to get back inside because my fellow business owners, there are a lot of them that can’t even be outside right now,” Marsden said. “So, I hope that I own this [restaurant] until the day I die. I can’t wait until we’re back inside and we can see each other in that setting again.”