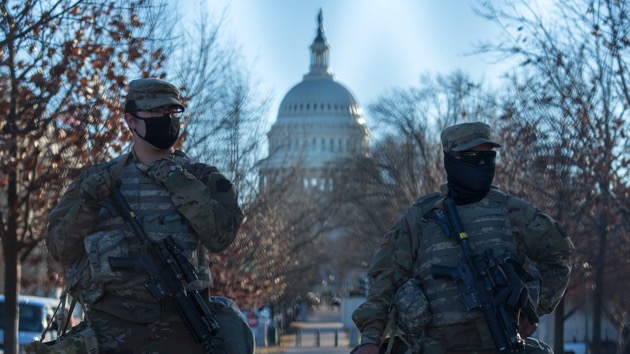 (WASHINGTON) — National security officials faced questions on Wednesday before a joint hearing of the Senate Homeland Security Committee and the Senate Rules Committee, the second hearing this week examining the Jan. 6 assault on the Capitol, as lawmakers look to drill down on lapses in intelligence sharing and the delayed security response to the attack.

Officials from the Department of Homeland Security, the FBI, Department of Defense, and the D.C. National Guard faced grilling on the timeline both leading up to the Capitol assault and in the hours after pro-Trump supporters first breached the building.

It took hours for the Guard to arrive at the Capitol while rioters launched brutal assaults against the outnumbered law enforcement presence, others stalked through the hallways and into congressional offices searching for lawmakers and former Vice President Mike Pence.

Maj. Gen. William Walker, the commanding general of the D.C. National Guard, testified that he previously he never received a formal request prior to the insurrection to be prepared for the type of mass violence that resulted at the Capitol, and told the Washington Post in January that Pentagon officials had actually restricted his authorities before Jan. 6 that required him to receive higher-level sign off to send the Guard to the scene.

In his prepared remarks, Walker says while former Secretary of the Army Ryan McCarthy on Jan. 5 approved his request to for National Guard support for traffic control and crowd management between the 5th and the 6th, McCarthy’s letter of approval withheld authority for Walker to be able to deploy a ‘Quick Reaction Force’ usually held in reserve who are equipped with civil disturbance response equipment.

“In addition, the Secretary of the Army’s memorandum to me required that a “concept of operation” (CONOP) be submitted to him before any employment of the [Quick Reaction Force],” Walker’s written testimony says. “I found that requirement to be unusual as was the requirement to seek approval to move Guardsmen supporting MPD to move from one traffic control point to another.”

Walker says at 1:49 p.m. on Jan. 6 he “received a frantic call” from former Capitol Police Chief Steven Sund about rioters breaching the Capitol’s security perimeters. Immediately after, Walker says he alerted Army senior leadership but the approval didn’t come and wasn’t relayed to Walker from the acting defense secretary until three hours and 19 minutes later at 5:08 p.m. The Guard arrived at the Capitol at 5:20 p.m.

While Walker’s opening statement says that it took more than three hours to get DOD approval at 5:08 p.m. to send in the D.C. National Guard, the account conflicts with that of Robert G. Salesses, the senior official performing the duties of the assistant secretary for homeland defense and global security.

Salesses’ testimony states that the acting defense secretary approved full activation of the D.C. Guard at 3:04 p.m., and that the Army secretary received the approval at 4:32 p.m. and ordered the Guard’s forces to depart for the Capitol.

In his opening remarks, the ranking member on the Senate Homeland Security and Governmental Affairs Committee, Sen. Rob Portman, R-Ohio, raked defense officials, noting “It’s unclear when senior defense officials authorized the National Guard, to deploy the Defense Department’s public line, public timeline states that Army Secretary McCarthy directed the D.C. National Guard to mobilize at 3:04 p.m. According to the timeline that National Guard provided to the committee and a briefing from Major General Walker the Commanding General the D.C. National Guard, [the] instruction to deploy didn’t arrive until 5 p.m.”

Portman added, “we didn’t know why the Pentagon took so long to deploy the National Guard. According to the former chief of Capitol Police and acting chief of DC police and Major General Walker the delay was due in part to concerns about the ‘optics’ of the National Guard, at the Capitol.”

In a hearing before the Senate Judiciary Committee Tuesday, FBI Director Chris Wray described the Capitol attack as “domestic terrorism” and defended the bureau’s intelligence sharing in advance of the riot, while saying the bureau was examining its processes and admitting the attack was not “an acceptable result.”

He provided little new information, though, regarding the events leading up to during the insurrection itself — something today’s witnesses may be able to shed additional light on amid finger-pointing by security officials in recent weeks about the disorganized response.