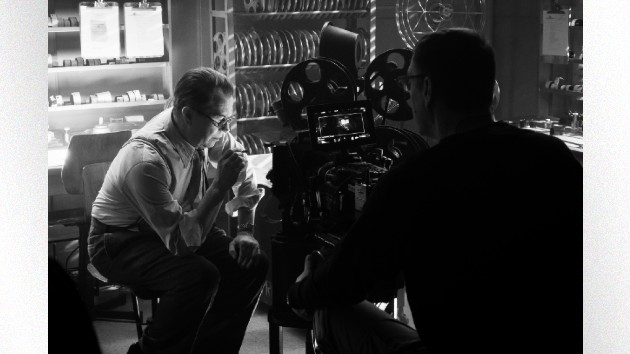 Oldman on the set of "Mank" - Nikolai Loveikis/NETFLIX
Posted on March 3, 2021 by ABC News

(LOS ANGELES) — In a candid interview with The Los Angeles Times, Gary Oldman looked back on his struggle with alcoholism and revealed he is nearly 24-years sober.

Oldman, who stars in the Golden Globe-nominated Mank, said his struggle with sobriety helped him better understand his character in the film.  The actor plays screenwriter Herman Mankiewicz, famous for penning Citizen Kane.

“How do you make this guy likable and not this grump, snarky drunk? That was the challenge,” he noted. “You can’t just load a character up with all the best quips. You have to understand why people are frustrated with him.”

“Herman, with that self-effacing humor, he was at lunch, drinking with a friend, who said, ‘Why don’t you go home sober for once?’ And he answered, ‘What? And have [my wife] throw me out as an impostor?’ I did the same thing,” the 62-year-old British actor admitted.

Reflecting on being a “functioning alcoholic,” Oldman confessed that “beneath the denial” he felt he was “getting away with” his drinking because of his career.

“I would sit down and tell the waiter, ‘I’ll have a large vodka tonic. And can you bring it now because I’m an alcoholic. I need it quicker,"” Oldman furthered.

“People romanticize it, and even I romanticized it.  All my heroes were drinkers or opium addicts,” the Oscar winner confessed, before detailing the downside of being a heavy drinker.

“I used to sweat vodka,” said Oldman. “It becomes such a part of you. My tongue would be black in the morning. I blamed it on the shampoo.”

Looking back at his addiction and his two stints in rehab, the actor expressed he “wouldn’t wish it on my worst enemy, to be in the grip of it. It’s hell.”

COVID-19 live updates: Cases dropping across US, rising in parts of Midwest, Northeast
Philadelphia students ‘scared to go to school’ as gun violence escalates
Charlottesville civil trial over deadly 2017 ‘Unite the Right’ rally set to begin
Rosario Dawson pens sweet message to Hayden Christensen at news he’ll be joining her in ‘Ahsoka’
‘Dune’ debuts to box office-topping $40.1 million
How did California go from the epicenter of the US pandemic to the lowest statewide transmission rate?