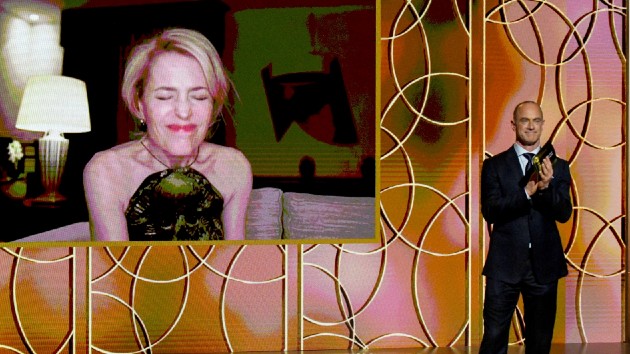 (LOS ANGELES) — The Crown became the act to beat during the 2021 Golden Globe Awards — winning an award in every category in which it was nominated.

While The Crown was nominated for six total, the Netflix drama had been nominated twice in two categories:  Best Supporting Actress in a Series, Miniseries, or Motion Picture for TV and Best Performance by an Actress in a Television Series, Drama.

For the prior category, the final nomination of the night for the acclaimed drama, Helena Bohnam Carter squared off against Gillian Anderson for the final trophy.  Anderson took home the prize for her tenure starring as the embattled British Prime Minister Margaret Thatcher.

Emma Corrin — who plays Princess Diana — beat out her competition (including a co-star Olivia Colman) and took home the 2021 Golden Globe for Best Performance by an Actress in a Television Series, Drama.

Meanwhile, Josh O’Connor, who plays Prince Charles, took home the Golden Globe for Best Performance by an Actor in a Television Series, Drama.

The Crown, which aired its fourth season in November 2020, is slated to begin production of its fifth season this summer.  The fifth season was intended to be the Netflix drama’s final one, but it was picked up for a sixth season in July.

What the 1st fundraising quarter signals about 2022 Senate map
What we know about the fatal police shooting of 13-year-old Adam Toledo
John Corbett confirms he’s on board for ‘Sex and the City’ reboot
Lord of Cha-Ching: Report says Amazon paying $465 million for one season of ‘Lord of the Rings’ series
Mom warns COVID-19 is still ‘serious’ as her 1-year-old fights the virus
Megan Thee Stallion and Lil Durk hit the strip club in “Movie” video