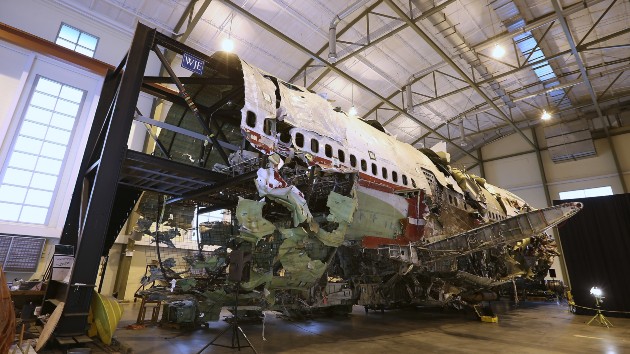 (NEW YORK) — The National Transportation Safety Board said it will destroy the remaining wreckage of TWA Flight 800 after nearly 20 years as a training tool.

TWA Flight 800 grabbed the world’s attention when shortly after takeoff from John F. Kennedy International Airport in July 1996, the Paris-bound Boeing 747 exploded, killing all 230 onboard. The NTSB investigation became the longest, most complicated and expensive investigation in aviation history, lasting more than four years and costing $40 million.

For weeks, pieces of the wreckage were pulled from the water off the coast of Long Island and meticulously pieced back together.

Housed for nearly two decades in a warehouse at the NTSB Training Center in Ashburn, Virginia, outside of Washington, D.C., the wreckage has been used to teach thousands of air crash investigators and transportation specialists from around the world.

On Monday, the NTSB said in a news release it will decommission and destroy the wreckage as the lease on the 30,000-square foot warehouse is set to expire.

In an agreement between the NTSB and family members of the crash victims, the NTSB promised the wreckage would never become an exhibit or public display. Students or visitors to the training center are strictly forbidden from taking photographs with the plane, and no photos are permitted inside the aircraft where seats remain in their numbered rows.

“To honor this agreement made with the families of the victims of TWA Flight 800, the NTSB will work closely with a federal government contractor to dismantle the reconstruction and destroy the wreckage,” the NTSB said.

While the wreckage is not open to the public, family members of the victims are allowed to visit as often as they like. In the years following the crash, loved ones would come and leave mementos in the seats of their family members.

The probable cause of the TWA Flight 800 crash was an explosion in the center wing fuel tank. The final report indicated that faulty wiring ignited the flammable fuel/air mixture, causing the explosion 12 minutes after takeoff.

The investigation and subsequent NTSB safety recommendations changed the course of aviation.

“From that investigation we issued safety recommendations that fundamentally changed the way aircraft are designed,” the NTSB said. “The investigation also led to a memorandum of understanding between the FBI and the NTSB regarding investigations of accidents resulting from intentional acts as well as evidence collection and preservation.”

The NTSB said it will decommission the wreckage on July 7 — 11 days before the 25th anniversary of the crash.

“For several months thereafter, the NTSB will thoroughly document the reconstruction using various 3-D scanning techniques. The scanned data will be archived for historical purposes,” the NTSB said.