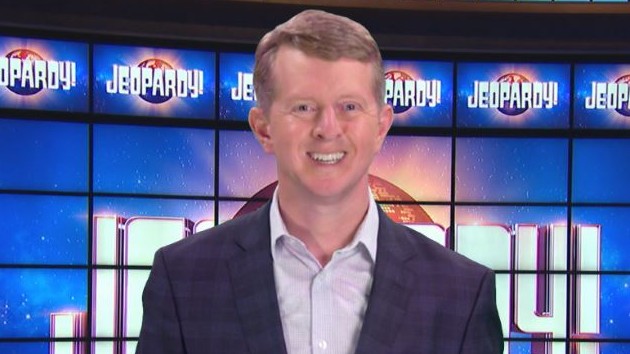 (LOS ANGELES) — Ken Jennings closed out his six-week hosting stint on Jeopardy! on Friday, where he served as the first person to keep the show running after the passing of Alex Trebek.

Before signing off one last time, Jennings took a moment to honor the beloved show host.

“That’s a wrap on my six weeks of @Jeopardy guest hosting. Thanks for watching, thanks for your patience with a tough learning curve,” the Jeopardy! champ wrote on Twitter. “And, as always, thank you Alex.”

Jennings ended his heartfelt shout out with a blue heart emoji.

While a new guest host will step in on Monday, Jennings will remain connected to the show by signing on as a consulting producer.

The 46-year-old trivia whiz teased the upcoming roster of famous faces who will step in for Trebek until a permanent replacement is found.

“Stay tuned for a carousel of surprise guest hosts, each more surprising than the last,” teased Jennings in a follow up tweet. “Collect ‘em all!”

The second guest host will be Jeapordy! and Wheel of Fortune executive producer Mike Richards, who will steer the ship until March 5.

Katie Couric is set to take over for Richards on March 8 through March 19, where by Dr. Mehemet Oz will pick up from there, however, his shows are currently listed as “TBD”

The show previously revealed that, starting in March, each guest host will single out a charity for the show to benefit and the show will donate the cumulative winnings earned by all the contestants at the end of the host’s tenure.

White House urges Americans to get vaccinated as B-117 variant surpasses 44% of all cases
Mom warns COVID-19 is still ‘serious’ as her 1-year-old fights the virus
Biden says he warned Putin he could have gone further on sweeping Russia sanctions
“Love your body without hesitation”: Hayley Hasselhoff celebrates as first European ‘Playboy’ “curve” cover model
Courtney Stodden comes out as non-binary
Derek Chauvin tells court he will not testify