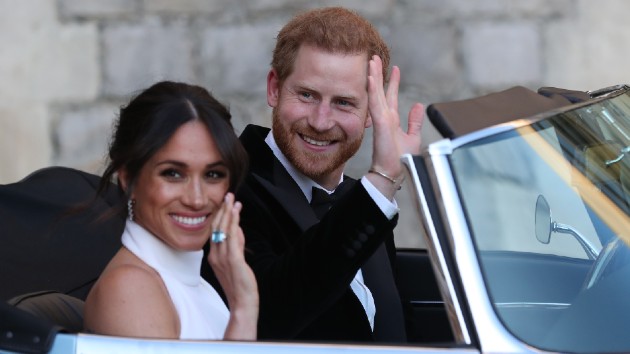 (LONDON) — Prince Harry and Meghan, the Duke and Duchess of Sussex, will not return as working members of Britain’s royal family, Buckingham Palace confirmed Friday.

“The Duke and Duchess of Sussex have confirmed to Her Majesty The Queen that they will not be returning as working members of The Royal Family,” the palace said in a statement.

Harry and Meghan shocked the world last January with their announcement that they planned to step back as “senior” royals, and “balance” their time between the U.K. and North America.

At the time, Harry and Meghan said they planned to “continue to honor our duty to The Queen, the Commonwealth, and our patronages,” but now they have confirmed a more permanent split from the royal family.

“Following conversations with The Duke, The Queen has written confirming that in stepping away from the work of The Royal Family, it is not possible to continue with the responsibilities and duties that come with a life of public service,” Buckingham Palace said in a statement.

The statement continued, “The honorary military appointments and Royal patronages held by The Duke and Duchess will therefore be returned to Her Majesty, before being redistributed among working members of The Royal Family.”

Harry and Meghan, who are expecting their second child, now live in California, and will remain financially independent. A spokesperson for the couple also issued a statement, saying the couple “offers their continued support” of the charities they will no longer formally represent.

The Duke and Duchess plan to break their silence in a 90-minute primetime special with Oprah Winfrey, set to air March 7.

‘Colin in Black & White’: Ava DuVernay and Jaden Michael explain why Colin Kaepernick series is “worthy of examination”
COVID-19 live updates: Colorado’s available ICU beds at lowest point of pandemic
NAACP calls on athletes not to sign with Texas teams over voting, abortion laws
With holidays looming, scientists point to additional data showing value of vaccines
Ashley Tisdale shares what it was like to star in the horror game ﻿’House of Ashes’
COVID-19 live updates: Nearly two-thirds of Americans have had at least one vaccine dose