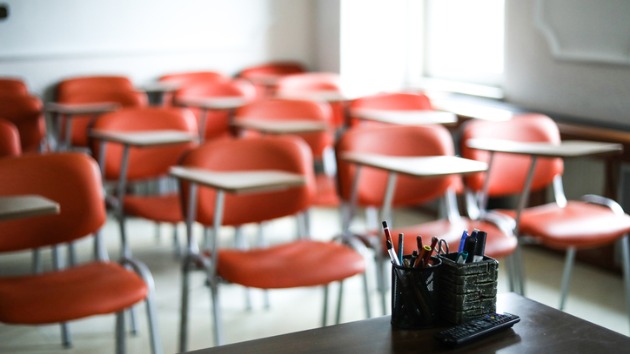 (GREENVILLE COUNTY, S.C.) — Since late fall, 60,000 students and teachers across Greenville County, South Carolina, have been filing into the classroom for school the old-fashioned way: in-person, five days a week.

Royster said he believes his schools have lower transmission than its surrounding community — a finding that is supported by research.

“I think it simply reinforces that this is a workable, viable solution,” Royster said of his school’s mitigation methods.

Greenville County is one of many examples across the U.S. of schools that have charted their own path forward since fall in the absence of a clear federal standard on what it means to reopen a classroom safely.

That all changed Friday when the Centers for Disease Control and Prevention for the first time issued specific steps schools could take depending upon their level of viral transmission in the community.

Still, since Friday’s release, health experts, teachers unions and political pundits have continued to debate whether the guidance is too strict or not strict enough, particularly when it comes to its suggestion of 6 feet of social distancing in “red” zones.

Districts like Greenville that have already reopened are unlikely to retrofit their plans precisely to fit the new CDC guidance, nor does the CDC have the power to enforce its recommendations. Still, other schools that haven’t reopened yet remain at a standstill, finding the guidance too stringent to meet completely.

“I know that not everybody was happy with how the school guidance read,” Rochelle Walensky, the new CDC director picked by President Joe Biden, said in a JAMA interview on Wednesday.

“I sleep at night because I know that it was science-based and it was that children and teachers who go to school based on what we recommended could and should be safe,” she added.

But in the days since it was announced, it’s become clear that the CDC’s input didn’t settle the debate.

Dr. Joe Allen, director of the Healthy Buildings Program at the Harvard T.H. Chan School of Public Health, took issue with the CDC connecting school reopening with coronavirus transmission, which he doesn’t believe accurately predicts how safe schools will be.

The key factors to keeping schools safe are good masking, ventilation and hand hygiene — regardless of case count in the area, Allen said.

“If we do these basics, we know we can keep kids and adults safe in schools,” he said. “What happened is that CDC layered this other level on top — these community spread metrics — and they are so strict or conservative that it’s unlikely any of these metrics will be met for the remainder of the year.”

Allen and his colleagues have also pushed back on the CDC’s guidelines to keep students 6 feet apart, which parents and schools have also argued would be impossible to do if everyone returned in-person, given the number of students and the size of the classrooms.

“We want to encourage as much distancing as possible, but we have to recognize the extreme and devastating costs and consequences of having millions of kids out of school, and that the 6-foot rule is what’s keeping a lot of them out of school,” Allen said.

The CDC insists in its guidelines that infections in schools “reflects transmission in the surrounding community.” The CDC also has maintained since the beginning of the pandemic that 6-feet of distance is what’s been proven to work. And, its guidance also suggests other ways to “layer” mitigation, such as surveillance testing of staff and students.

“I wouldn’t even say we did the best we could,” Walensky said of the plan, which pulled research from schools in the U.S. and Europe that have been open since the fall. “We did the best that science could inform.”

Walensky also said she has hope that the recent decline in cases nationwide will allow schools to be “a little bit more liberal in terms of what we’re able to do to bring the kids back to school safely.”

When the guidance was released last week, 90% of school districts were in the red zone, an area the CDC deemed unsafe for in-person learning in middle or high schools unless all other mitigation efforts were strictly maintained. That number has now fallen to 75%, Walensky said.

Other health officials and advocacy groups have praised the guidance, including the American Academy of Pediatrics, which called it “right on target.”

“These public health protocols should continue to be the model schools follow as they increasingly transition to in-person learning,” Lee Savio Beers, president of the American Academy of Pediatrics, said in a statement after the guidance was released.

“The science shows that if schools have what they need and are able to decompress classrooms, ensure people are wearing masks, do some screening, improve ventilation — you can have kids in classroom learning, very safely, even before you have vaccination of staff and teachers,” Besser told ABC’s “Good Morning America” after the guidelines were released. “That gives me hope.”

“You have to get the numbers down in communities and those are moving in the right direction as well,” he added.

In Greenville, the superintendent of schools has seen another benefit to bringing kids back to the classroom: widespread mask-wearing because the teacher said so.

“Every day, if you count the students that are in person and our employees, that’s over 60,000 people that for somewhere between seven and nine hours a day are doing what the CDC, South Carolina Department of Health and Environmental Control and medical experts say they should,” Royster said.

His district has continued to see cases rise dramatically over school breaks when students are free to spend that time in the community without stringent mitigation measures, Royster said, but fall within a week of students returning.

To Allen, there’s clear science to back up Royster’s anecdote.

“What we’ve seen in the data is that when kids are in school with good control measures in place, this can actually be an environment that’s where risk is controlled for both kids, as well as the teachers and other adults in the school,” Allen said.

Given the unsettled debate, even after the CDC released its long-awaited guidelines, reporters and public health experts have consistently asked the Biden administration for clarity. Conservatives have used the debate to criticize Biden for issuing restrictive guidance despite his initial pledge to open schools within his first 100 days.

But the Biden administration has struggled to navigate the debate, attempting to walk a fine line between telling reluctant teachers to return to school while also trying to jumpstart the nation’s education system.

In December — prior to Biden’s inauguration — he announced that “if Congress provides the funding we need,” he would work to see that a majority of schools would open in his first 100 days of office. After taking office, his press secretary said that could mean being in-person just one day a week, but Biden clarified at a CNN Town Hall on Tuesday night that his goal is now to get K-8 students back to school five days a week.

The goal raises questions, however, about how a majority of students can return to school in the next two months if 75% of the country currently falls under the “high-transmission” category. Under the CDC guidelines, much of the county would remain in virtual or hybrid learning until case numbers declined.

On vaccines for teachers, the White House has also confirmed that they do not believe teachers need to be vaccinated before returning to school, though they recommend teachers be prioritized for vaccine eligibility.

Ultimately, however, the White House and the CDC said it’s still up to local school boards.

“What we’re trying to do is evaluate the risk of COVID in the school, a potential outbreak … versus the counterfactual, which is all the education loss, all of the food security loss, all of the mental health,” Walensky said.

“I think a year from now, we’ll start understanding all of those losses and we’ll really need to think about what the risk we were willing to take at the time.”