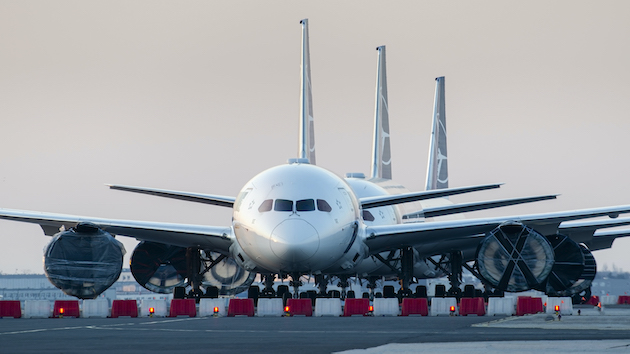 (NEW YORK) — Amid the COVID-19 pandemic, in 2020, U.S. air carriers faced their worst economic year in history and carried the fewest passengers in more than three decades.

An estimated 368 million passengers flew in 2020, the lowest number since 1984 when 351 million flew, according to the Bureau of Transportation Statistics.

The month after the Centers for Disease Control declared a global pandemic, April saw the biggest drop in U.S. passenger traffic. Three million people took to the skies that month, a 96% year-over-year drop and the lowest monthly total in BTS records since 1974. The previous low was 14.6 million passengers in February 1975, according to data released this week by BTS.

The nation’s largest airlines in the U.S. lost a combined $46 billion in pre-tax losses, according to industry trade group Airlines for America (A4A).

International travel was hit worse than domestic due to government restrictions and fears over COVID-19 spread. The biggest drops were on flights between the U.S. and China, Australia and Hong Kong, all seeing a 98% percent year-over-year drop.

Overall, Mexico, the Dominican Republic and Colombia were the top three countries for non-stop international travelers.

As for 2021, Cancun, Mexico City and Guadalajara were the top three airports for passengers on direct flights to and from the United States in January, according to A4A.

-Corporate travel is down 85%.

-U.S. airline employment fell by 93,283 jobs between March and November 2020. More jobs were lost in those eight months than were added over the preceding 10 years, according to A4A.

What are NFTs? Everything you need to know about non-fungible tokens
Tiger on loose in Houston for nearly a week moved to animal sanctuary
Rep. Liz Cheney criticizes ‘disgraceful’ GOP attempts to ‘whitewash’ Capitol attack
Former NBA champion Ben Wallace to be inducted in 2021 Basketball Hall of Fame
North Carolina teen athlete speaks out after being forced to cut hair
After Duane Wright shooting, city council to vote on police changes