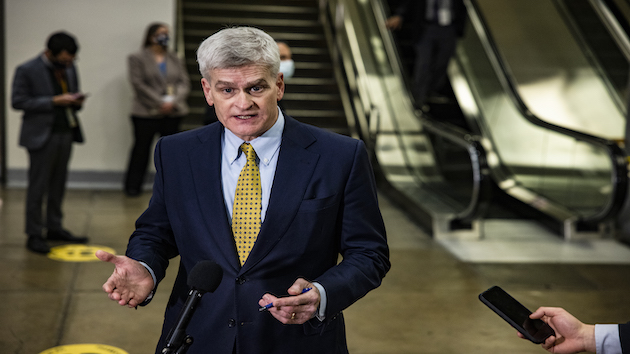 (WASHINGTON) — Sen. Bill Cassidy, R-La., who crossed party lines and voted alongside six other Republicans to convict former President Donald Trump, said Sunday morning on ABC News’ “This Week” that he supports a full investigation into the events of Jan. 6, as other lawmakers who appeared on the show called for a 9/11-style commission to investigate the Capitol attack.

“I think there should be a complete investigation about what happened on Jan. 6. Why was there not more law enforcement, National Guard already mobilized, what was known, who knew it, and when they knew it, all that, because that builds the basis so this never happens again in the future,” Cassidy, who said he believes Trump’s actions fit the definition of an insurrection, told ABC News Chief Anchor George Stephanopoulos.

Cassidy defended his vote to convict Trump, telling Stephanopoulos he believed it was clear Trump had a “motive.”

“I listened very carefully to all the arguments. But if you describe insurrection as I did, as an attempt to prevent the peaceful transfer of power, we can see the president for two months after the election, promoting that the election was stolen,” Cassidy added. “It was clear that he wished that lawmakers be intimidated. And even after he knew there was violence taking place, he continued to basically sanction the mob being there, and not until later that he actually asked him to leave. All of that points to a motive, and a method. And that is wrong, he should be held accountable.”

In interviews following Cassidy, House impeachment manager Rep. Madeleine Dean, D-Pa., and Sen. Chris Coons, D-Del., told Stephanopoulos they would support the creation of a 9/11-style independent commission to investigate the attack on the Capitol.

Cassidy signaled early in the week he might vote to convict the former president by flipping his stance on the trial’s constitutionality in a vote on Tuesday, joining only a handful of Republicans who also voted it should proceed. The Louisiana GOP voted to censure Cassidy just hours after he voted to convict Trump, but Cassidy defended his stance to his constituents in Louisiana, telling Stephanopoulos he took an oath to uphold the Constitution.

“People want to trust. They want to trust their leaders, they want people to be held accountable. Now, we are holding — I’m attempting to hold President Trump accountable — and that is the trust I have from the people that elected me, and I am very confident that as time passes, people will move to that position.”

Stephanopoulos pressed Cassidy on Trump’s future within the Republican Party.

Dean, one of the impeachment managers, told Stephanopoulos she credits the Republicans like Cassidy who voted to convict the former president.

“I give credit to the seven Republicans who stood with us, who followed the facts, who looked at the law and looked at the evidence and found this president guilty of high crimes and misdemeanors,” she told Stephanopoulos. “It was powerful to hear the 57 guiltys. And then it was puzzling to hear and see Mitch McConnell stand and say ‘not guilty,’ and then minutes later stand again and say he was guilty of everything. History will remember that statement of speaking out of two sides of his mouth.”

Stephanopoulos challenged Dean on why House impeachment managers abandoned their plan to call witnesses after securing enough votes to consider it during a Saturday morning vote. Rep. Jamie Raskin, the lead impeachment manager, said the prosecution wanted to subpoena Republican Rep. Jaime Herrera Beutler regarding a talk she said she had with House Minority Leader Kevin McCarthy about Trump allegedly refusing to stop the rioters.

But both Dean and Coons said in their respective interviews that they do not believe calling witnesses to testify would have changed the outcome of the vote.

“We didn’t need more witnesses. We were in a room full of witnesses and victims, we needed no more witnesses. But what we were able to secure was a stipulation by the former president’s lawyers that what she had said was true, it was entered into the record further witness of the high crime and insurrection incited by a president,” Dean said.

Stephanopoulos also challenged Coons on that point, asking if he thought it would have made a difference.

“So you don’t believe that a full trial, more witnesses, more documents giving us a sense of what was going on in the inside the White House, would have better served the cause of justice and accountability?” Stephanopoulos pressed.

Coons said he was impressed with the 57 votes that Democrats managed to get, the most bipartisan impeachment in the history of the country and a number he didn’t think they would achieve.

“They could have had 500 more witnesses, it wasn’t going to change the outcome. Once Mitch McConnell made it clear he intended to acquit even despite the compelling evidence, what the House managers needed wasn’t more witnesses or more evidence, what we all needed was more Republican courage,” Coons said. “I, frankly, at that time did not think that spending months fighting over additional witnesses would have changed the outcome of this trial one bit.”

The Delaware senator was also confident there would have been the 17 Republican votes needed to convict the former president if they had cast secret ballots.

“I’m fairly certain there would have been a vote to convict with a secret ballot,” Coons said. “I frankly think there were a majority of Republicans hanging their hat on a not-very-compelling constitutional argument, and we need to find a way that we can deliver that accountability. Ultimately it’s in the hands of the American people. But I do think the Republican Party is deeply divided right now, and I’m grateful for the seven Republican senators and 10 Republican House members who stood up for the Constitution and stood up to President Trump.”

Coons said he thinks there could be grounds for additional proceedings against Trump in the futurebut added it shouldn’t be a priority.

“I think there’s grounds for further proceedings, both civil and criminal against former President Trump,” Coons said. “But George, I’m also focused on moving forward with delivering the urgent pandemic relief, the revitalization and strengthening of our economy that President Biden has been focused on since becoming president. … I think that phase of accountability moves to the courts now, and we in Congress need to move forward with delivering the expanded unemployment checks the stimulus checks the reinvestment in our economy that the American people, so desperately need and deserve.”

Stephanopoulos pushed Coons on how bipartisan the beginning of Biden’s time in the White House has been, given that Democrats are laying the groundwork to proceed with a simple majority vote to potentially pass coronavirus relief.

“George, let’s be clear, President Biden has met and spoken with bipartisan group of senators, there are 10 Republican senators who are still negotiating with the White House, with a group of Democrats, about trying to find a bipartisan path for an appropriately bold and broad relief package,” Coons said.

“But we in the House and Senate, Democrats have provided a pathway so that if a month from now, as unemployment checks are at the verge of stopping for 10 million Americans, we can proceed with a Democrat-only bill,” he continued. “President Biden is uniting the American people. He is moving forward on relief that has the support of three-quarters of the American people. And from the way he spoke at his inauguration to the actions he’s taken in his first couple of weeks, he is showing us what real presidential leadership looks like in sharp contrast to his predecessor. He ran on unity, and I believe he’s delivering unity for the American people.”