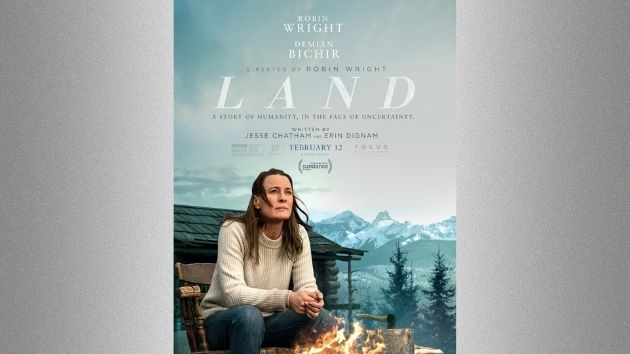 Courtesy of Focus Features
Posted on February 12, 2021 by ABC News

(LOS ANGELES) — Land, Robin Wright’s directorial debut, will transport its audience into the most extreme weather conditions when it roars into theaters Friday, February 12.

Wright, who transitioned from in front of the camera in movies like The Princess Bride, took her first foray behind the camera for this daring story.

The survival film tells the story of a woman named Edee, who so filled with grief that she feels the only way to cope is to move to the mountains and try to survive on her own.

The movie, which takes place in the Rockies but was actually shot in Alberta, Canada, presented several challenges for Wright.  As for what she said was the hardest part about making her directorial debut, the 54-year-old Emmy nominee admits to ABC Audio the weather was the worst.

“It was so cold there. We need another word for freezing. It was like, freezing was an understatement,” she dished, who admitted she and the crew spent a good amount of time “trying to keep yourself sane in the weather.”

“Now I know how to chop wood,” she laughed and, despite living in sprawling properties in warmer climates, believes she could do exactly what Edee accomplished. “I could live on the mountain for sure. For sure.”

If she would film Land in the bitter cold all over again, Wright says she would.

“It was the greatest experience for my first feature directorial debut. Incredible,” she smiled. “I love the beautiful message that it has, and I hope people walk away from it just feeling empowered and hopeful about our new future that’s coming.”

How COVID-19 booster shots could help in global fight against the virus
Sandra Oh says she won’t return to Grey’s Anatomy: “I have moved on”
Top law enforcement officials to testify on domestic violent extremism
Ewan McGregor dodges spoiler-thirsty ‘Obi-Wan’ questions like a Jedi Master on ‘Jimmy Kimmel Live!’
Kiefer Sutherland back in the spy game for Paramount+
Amanda Kloots says “kindness” helped her get through the COVID-19 pandemic