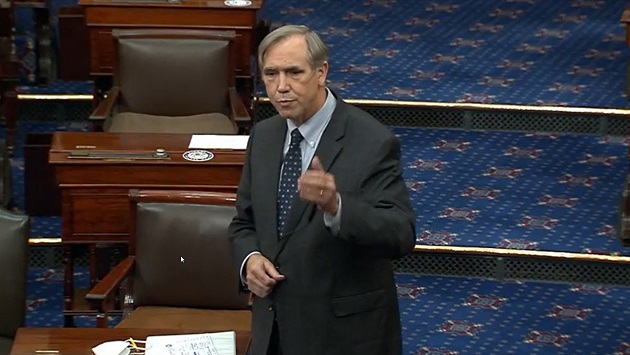 congress.gov via Getty Images
Posted on February 10, 2021 by ABC News

“It seems extremely difficult if you don’t get two-thirds to convict, can you get 60 to close debate on a censure motion? It seems unlikely unless you have — for some reason — we do have 60 plus votes, but not 67 on conviction. Then it’s certainly within the realm of possibility,” Merkley told ABC News Chief Washington Correspondent Jonathan Karl and Political Director Rick Klein.

“But I keep hearing the senators who feel that we’ve gone through the whole impeachment process really don’t want to turn around and go through it all again on a censure. That is the Republican side, just feeling like this is a painful, difficult thing for them to go through, as it is as it is for all of us,” he added.

Merkley told Karl and Klein that he thinks his GOP colleagues are torn and that censuring the former president may be the solution.

“…I think my Republican colleagues are torn between their base…and their sense that they are standing at a moment in history when they should be fighting for principles,” he said. “But they’re not doing so and they’re troubled by that. And maybe if censurship is a way to resolve that tension that they’re feeling, that might be possible.”

During Trump’s first impeachment trial, Merkley introduced a bill that would require witnesses in future impeachment trials. He told Klein he still stands behind the principle that witnesses are an essential part of the process, but he doesn’t believe the Senate should vote to call witnesses if it is against the advice of the prosecution.

“I don’t think that any senators should block witnesses desired by the prosecution or by the defense,” he said.

Karl asked Merkley if he felt it was important for the trial to move quickly in order to allow focus to turn to President Joe Biden’s agenda.

Merkley said the fairness of the trial is the priority, but he believes that Trump and his defense team would like to get it done quickly.

“So we’re not too focused on the time because whether it’s Saturday or Tuesday, it just needs to be a fair process. And I’m glad that the rules were laid out and supported in a strongly bipartisan manner,” he said. “But to your broader point, should the defense decide to do a stalling tactic and call 100 witnesses to try to tie us up for weeks and weeks, that would be unfortunate, but I don’t think it’s something that President Trump would want.”

“I don’t think he wants this display to continue. The longer the longer it goes, the more possibility that Republicans decide that they’re going to vote their conscience rather than their base,” he added.

Tawny Kitaen, star of Whitesnake videos and ‘Bachelor Party,’ dead at 59
First responders talk about the often-hidden pain and trauma of working in a pandemic
Idris Elba’s ‘Stay Frosty’ lands at Warner Bros; Tyler Perry joins the cast of his Netflix film ‘Jazzman’s Blues’
Gloria Estefan says ‘Father of the Bride’ remake will “celebrate cultures in a wonderful, warm, deep way”
Rep. Elise Stefanik on path to GOP leadership after aligning with Trump
Crocs is giving away 10,000 pairs of shoes a day to health care heroes