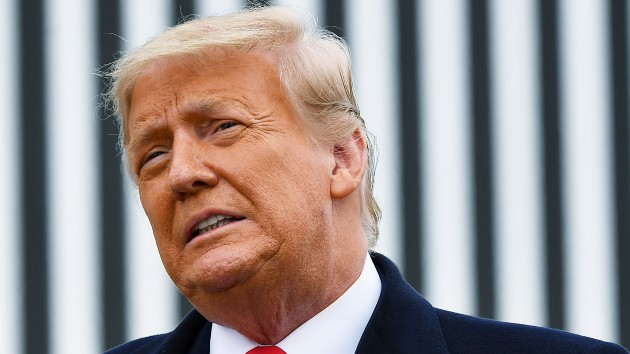 (ATLANTA) — The district attorney’s office in Fulton County, Georgia, has formally launched a criminal probe into former President Donald Trump’s efforts to overturn his election loss in the state, after Trump was heard in a January phone call pleading with Secretary of State Brad Raffensperger to help him “find 11,780 votes,” the exact number he needed to win Georgia.

The launching of the investigation was revealed in a letter from District Attorney Fani Willis to state officials asking them to preserve any documents potentially related to the 2020 general election, “with particular care given to set aside and preserve those that may be evidence of attempts to influence the actions of persons who were administering” it, which would include Trump’s Jan. 2 phone call with the secretary. The existence of the letter was first reported by the New York Times and obtained by ABC News.

“This investigation includes, but is not limited to, potential violations of Georgia law prohibiting the solicitation of election fraud, the making of false statements to state and local governmental bodies, conspiracy, racketeering, violation of oath of office and any involvement in violence or threats related to the election’s administration,” Willis writes in the letter.

News of Willis’ investigation comes just two days after it was revealed that the Georgia secretary of state’s office had launched its own investigation into Trump’s phone calls to state officials, and in the midst of the U.S. Senate’s ongoing impeachment trial as Democrats seek to convict Trump on charges that his efforts to thwart his election loss helped to incite the Jan. 6 insurrection at the U.S. Capitol.

The letter specifically notes that Willis’ office currently has “no reason to believe that any Georgia official is a target of this investigation.”

Trump’s first known call to Georgia state election officials took place in December as the state was conducting a signature match audit in Cobb County, which is outside Atlanta. Trump allegedly pleaded with an investigator in Raffensperger’s office to “find the fraud,” according to an individual familiar with the call.

Later, when ABC News obtained audio of his hour-long Jan. 2 call to Raffensperger in which Trump pleaded with him to find the exact amount of votes needed to overturn his election loss, election law experts argued Trump could have violated as many as three separate state laws.

Trump has previously denied any wrongdoing, and his impeachment lawyers filed a brief last week disputing that Trump “acted improperly in that telephone call in any way.”

Asked for comment on Willis’ investigation, a spokesperson for Trump did not immediately respond to ABC News.

What are NFTs? Everything you need to know about non-fungible tokens
Tiger on loose in Houston for nearly a week moved to animal sanctuary
Rep. Liz Cheney criticizes ‘disgraceful’ GOP attempts to ‘whitewash’ Capitol attack
Former NBA champion Ben Wallace to be inducted in 2021 Basketball Hall of Fame
North Carolina teen athlete speaks out after being forced to cut hair
After Duane Wright shooting, city council to vote on police changes