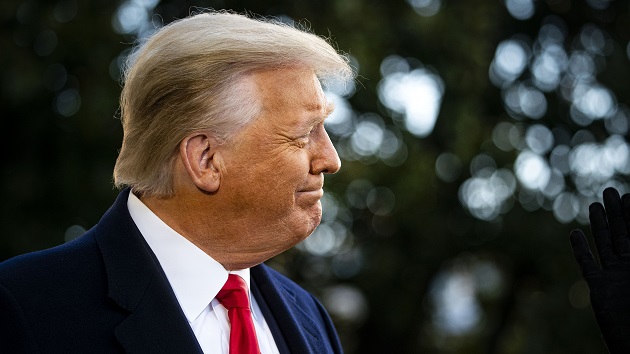 (WASHINGTON) — As his second Senate impeachment trial gets underway, former President Donald Trump faces growing legal scrutiny of his conduct in the aftermath of the 2020 election and of his business practices in the years before taking office.

New York Attorney General Letitia James, who is leading a civil probe of Trump and his family business, told ABC News Live that she is acquiring new evidence daily — “thousands and thousands” of documents — even as the former president continues to resist cooperating since leaving office.

“We’re not getting more cooperation. They continue to obstruct. They continue to come up with excuses, and we will seek to compel their testimony and production of documents if necessary,” James said. “The evidence and the investigation are not going to change simply because Donald Trump is now a private citizen.”

James has been reviewing whether Trump manipulated the value of some of his real estate holdings for tax and insurance purposes, zeroing in on at least four properties in three states, according to public court records. The Trump Organization declined to comment on James’ interview with ABC News.

Trump’s attorneys have long denied any wrongdoing and call the probe “politically motivated.” They’ve asked the U.S. Supreme Court for a second time to block the release of his tax returns, and a decision is imminent.

“At this point in time we do not expect to depose the [former] president of the United States, but all of the options are on the table,” James said of her investigation. “Assuming that we uncover any criminal conduct, we will seek the authority to change our investigation into a criminal matter.”

“Under D.C. law, inciting violence is a misdemeanor offense. And it’s my office’s responsibility to investigate whether those words exceeded the First Amendment protection and went into a zone of criminality, for inciting the mob that charged the capitol,” Racine told ABC News late last month.

At least 14 of the alleged insurrectionists now facing criminal charges have since said they were following Trump’s encouragement, according to an ABC News analysis of court documents and news reports.

“Just because somebody gave a speech and people got excited, it doesn’t mean it’s the speechmaker’s fault,” Trump attorney Bruce Castor told KYW Newsradio in an interview last week. “It’s the people who got excited and did what they know is wrong.”

Trump’s attorneys also have denied that the former president’s phone calls to Georgia election officials in January were inappropriate or threatening, writing in their impeachment defense brief to the U.S. Senate that that president was simply “expressing his opinion.”

On a now-public recording of one call, Trump asked Georgia Secretary of State Brad Raffensperger to “find” enough votes to help him win, even though Joe Biden’s victory in Georgia had been certified twice.

“There’s nothing wrong with saying that, you know, um, that you’ve recalculated,” Trump is heard telling Raffensperger on the recording.

“I like to think that the Georgia officials will do what the law requires, that they will do a thorough investigation, and, if they do, I think they will conclude that there has been a violation of criminal statutes and proceed accordingly,” Banzhaf told ABC News Live.

After a fact-finding investigation by the Georgia Secretary of State’s office is completed, the state election board is expected to vote on whether to refer the case to Georgia Attorney General Chris Carr and Fulton County District Attorney Fani Willis for further investigation and possible prosecution.

Willis characterized the Trump call as “disturbing” in a statement after it became public and has pledged to review the matter aggressively and fairly if it’s referred to her.

“I know D.A. Willis, and she will move it as fast as possible but she’s not going to move it forward just to satisfy anyone, Democrat or Republican,” Joshua Morrison, a former senior assistant Fulton County district attorney, told ABC News Live. Morrison said he believes Willis likely would pursue an investigation, though it could take months or years to complete.

“I think it’s very possible that in the near future we could see a criminal indictment filed against former President Donald Trump,” said Claire Finkelstein, director of the Center for Ethics and Rule of Law at the University of Pennsylvania Law School.

Trump also still faces fallout from allegations of sexual misconduct dating back decades and could soon face deposition under oath.

A New York judge recently allowed the defamation case of Trump accuser and former Elle magazine writer E. Jean Carroll to move forward, as her attorney, Roberta Kaplan, vows to challenge the former president over his history of false and misleading statements.

“When we depose you, you’re not going to get away with that,” Kaplan told The Washington Post in a recent profile. “He had the mantle of the presidency, and that’s now gone.”

Trump has said he has “no idea who this woman is” and calls Carroll’s allegations “totally false.”

“The fact that the Republicans are likely not going to vote to convict Trump in the impeachment is all the more reason why, if he committed violations of the law, as I think he did in Georgia and may have in New York and other places, that he should be prosecuted for them — otherwise he gets off scot-free,” Banzhaf added.

The investigations and possible prosecutions of a former American president are unprecedented, historians said.

“It’s important that we engage in thorough and full investigation of all of the facts and make sure that our allegations are corroborated by the evidence,” said James, the New York attorney general. “I can’t give you a time frame” for the conclusion of the investigation.

“This investigation is not based on politics,” she said. “It’s based on the law and the evidence.”

Child care at core of women’s slow post-pandemic return to work
More fentanyl seized by CBP so far in 2021 than in all of 2020
Broncos hire Kelly Kleine as Executive Director of Football Operations/Special Advisor to the General Manager
2 detention deputies terminated after death of Black inmate Jamal Sutherland in Charleston jail
Glenn Close, Jake Gyllenhaal, Leslie Uggams and more to unite for ‘Show of Titles’ musical benefit for Actors Fund
The IRS says 88% of families will receive a bigger child tax credit. How much will you get?